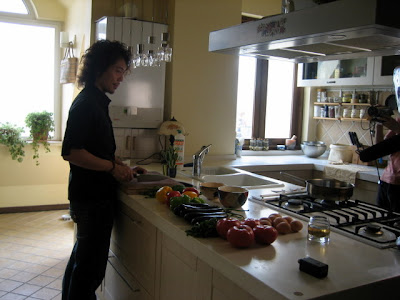 I think deep down I secretly wanted to film a cooking movie. Something along the lines of Eat Drink Man Woman. Sumptuous shots of produce, chopping, sauteeing, julienning, a veritable orgy of comestables. Neither the script or the production schedule would allow for indulgent cooking sequences. But I managed to convince our team that since Thomas's character is a restaurateur, it would be natural for him to be furiously making omelets the morning he fights with his girlfriend. So off I went to the market with the adorable Chinese parents of the friend whose magnificent apartment (and kitchen, above) we were using as the set for that day's filming. We spoke no common language, except that I know Chinese numbers so I could figure out the cost of things (I hold the purse strings of this operation). We communicated with lots of smiles, hand motions and a few confusing moments. We returned with a bounty of shiny eggplants, cilantro, tomatoes, prickly cucumbers, yellow peppers and asparagus. Unfortunately, Thomas, talented guy that he is, can not cook to save his life and watching him chop a tomato was quite sloppy and maybe even a little violent. Luckily, Li, a chef, was on hand to be a body double (really a hands double) and did some rhythmic, camera-worthy chopping. 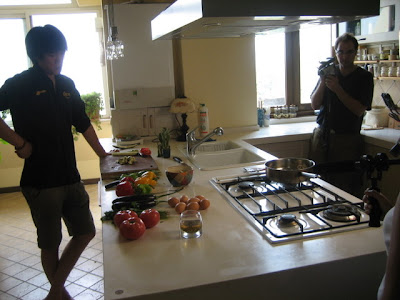