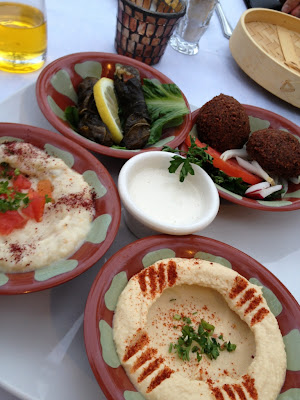 It's hard to find good Middle-Eastern food in Miami. So I was excited to find Le Pine, an elegant and upscale neighborhood spot tucked away on the otherwise sleepy Kane Concourse in Bay Harbor Islands. Since it opened last year I've been there half a dozen times for lunch and dinner. Since I rarely have time to dine in my own neighborhood, that's saying a lot. This place is good. This is proprietor Hassib El Zein’s first restaurant and it is neatly outfitted with maroon couches, tables bedecked in white linens and a roaring brick oven from which fluffy homemade pita bread and crispy baklava emerge. There’s also a handful of sidewalk tables that provide a pleasant outdoor option. The name refers to the ubiquitous pine nut that shows up in many dishes on the menu and the pine trees of Lebanon. 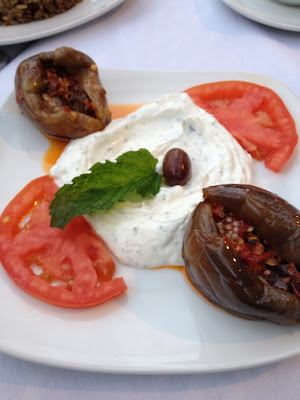 Chef Fayssal Karout is from Beirut (by way of Michigan) and helms a kitchen that marries the predictable (hummus, kabobs) with the exotic (stuffed pickled eggplants, raw kibbie). All sauces are made from scratch – the tahini, hummus, babganoush and garlic aioli that flank the kabob platters. Prices are reasonable with small plates ranging $6-$8 and mains averaging $20. There’s Lebanese wine on hand - Chateau Kefraya and Chateau Kasara – both from the Bikaa Valley as well as Lebanese and Moroccan beer. 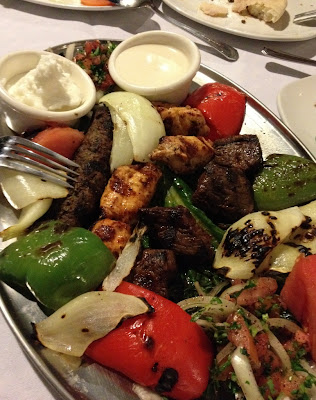 Dinner starts with house made pita bread and a small dish of olive oil mixed with za’atar, the herbaceous blend of wild thyme, sumac, and sesame seeds. The mezze sampler is a great way to enjoy a bit of everything – with small bowls of homemade hummus, babaganoush, falafel and stuffed grape leaves. The “bakery” section includes empanada-like “pies” stuffed with spinach, cheese or ground meat. The house made Labneh, is a thick and tangy yogurt easily scooped up with wedges of pita. Specialties of the house include the Makanic, a ground beef and lamb sausage and the Arayes, a toasted pita stuffed with ground beef, onions and pine nuts. All entrees are served with either couscous or Mediterranean “pilaf” rice and include colorful platters of shish kabob made with tender hunks of lamb, moist chicken and “kofte,” ground beef mixed with parsley and onions. Side salads of tomatoes and onions dusted with sumac round out the fragrant dishes. Dessert is a simple affair – a glass of tea and a small plate of baklava served two ways, the traditional wedge or the “round” cookie-like sweet made with walnuts and pistachios.
No comments:

It's obvious that Celebrity Cruises takes their culinary program seriously. Two years ago they tapped John Suley, a 2010 James Beard Foundation “Rising Star Chef” nominee and former Gotham Steak chef, to head up culinary operations. And their latest ship,The Reflection, is awash is "specialty dining" outlets. That's cruise-speak for smaller, more upscale restaurants where passengers dine for fee (usually $5-$40 per person) as an alternative to the usual buffet and mass dining rooms also available on the ship. We hopped on board to sample the goods at the "Taste of Modern Luxury Event" as part of the South Beach Wine and Food Festival. The event was a round-robin of venues whereby event goers visited six spots on the ship and got to sample a dish, a cocktail and chat with the chef.
In a sign that cocktail culture is gaining traction in mass-appeal circles, the culinary roster also featured Junior Merino who goes by the name "The Liquid Chef." He developed the cocktail program for the ship's Molecular Bar and gave a crash-course on how he uses liquid nitrogen, fresh squeezed juices, and specially created syrups to put together drinks for guests who prefer not to pound 32-ounce daiquiris (not that there's anything wrong with that).

The entrance at Tuscan Grille has the cave-like feel of a wine cellar, and the focus is Italian. There are authentic meat slicers and a bevy of cured meats available. The carpaccio di manzo with sun-dried tapenade and arancini risotto balls with basil ailoi greeted us here.
Qsine is more of a whimsical spot with funky place settings, iPad menus and playful food presentations. There we sampled grilled zahtar lamp chops and almond-crusted French toast.
We were pretty full but saved room for a bit of ducle de leche crepes at Bistro on 5, a dainty creperie offering half a dozen sweet and savory stuffed pancakes. As the event wound down and everyone gathered in the main dining room, I felt a little bit of envy towards the passengers we saw filing in for their seven-day excursion. Based on what we tasted that day, it was clear they'd be going on a culinary journey as well.
No comments:

Probably the only thing that could get me out and at Casa Tua at 9am the morning after the Burger Bash was the boisterous Italian chef Fabio Viviani. Along with a dozen other groggy food writers I settled in at the rustic communal table framing the open kitchen at Casa Tua to catch the former Top Chef star (and now Bertolli endorser) share some culinary wisdom and make gnochhi.
First, there was lots of Italiano chit-chat: "I don't want to be an Iron Chef, I want to be your Italian grandmother," which sums up his approach to celebrity chef stardom and his choice to push homestyle cooking via Bertolli and his restaurants rather than shoot for more TV fame.
Then, some cooking tips. The first rule of gnocchi-making: "Buy the cheapest, nastiest potatoes you can find." Second, let's the dough sit overnight. "You need to be patient. Making gnocchi is like foreplay."
And he's still planning on opening a Miami spot, though he wouldn't divulge where or when. "It will be like my Chicago place Sienna Tavern but we're going to Miami Vice it," he explained.

I don't have many photos from the Burger Bash, the annual burger-off put on by the South Beach Wine and Food Festival. That's because I was too busy double-fisting glasses of rosé and sliders and trying not to get grease all over my phone as I live-tweeted the event (for late-breaking burger news). But I did manage to taste at least seven (or possibly 12) burgers before I lapsed into a beef-induced coma and could only be revived by caramel truffles at the Godiva tent.
But onto the hard news: It was all about the crunchy burgers as Bobby Flay broke Michael Symon's three-time winning streak by taking home the People's Choice award at the 2013 Sobe Burger Bash. Flay’s signature green chile cheeseburger topped with potato chips bested Symon’s entry from B Spot Burgers, dethroning the Cleveland chef.
Amid predictably-long lines for popular spots like Burger and Beer Joint (I skipped that), The Forge (with a great truffle burger) and Shake Shack were TV personalities Iron Chef Morimoto and Guy Fieri churning out beefy goodness for the Amstel Light-swilling crowds that swarmed the tents on the beach.
New contenders in this year’s competition included Tampa-based Burger 21 headed by Chef Shane Schaibly with a Tex-Mex burger. Chef Paul Malvone, co-founder of Boston Burger Co., served up his "Hot Mess Burger," topped with bacon, jalapenos, sweet potato fries and dripping American cheese between two Thousand Island dressed buns.
But the buzz on the sand was for the double-patty on a toasted bun courtesy of Atlanta-based Holeman and Finch restaurant. Guy Fieri’s tent was doling out Jell-o shots (yes, I will admit I consumed one in the gluttonous frenzy) while Tim Love’s Fort Worth-based Love Shack topped their patties with crispy lamb bacon (loved it).
Best side dish goes to Ft. Lauderdale Rok Brgr for their mini-lobster corn dogs. New York chef Michael Whitel previewed a delectable burger from his soon-to-open The Butterfly, a Wisconsin-inspired cocktail bar and restaurant he's opening in Tribeca.
Local chef Hedy Goldsmith had an impressive pavilion piled high with her overstuffed “Nutter Butter” dessert sliders stuffed with peanut butter cream in a cookie sandwich.
No comments: