Bar Rosso Has A Blog

And it's kinda cute, with photos from events and videos of wine tastings. What other restaurants out there have well-maintained blogs (and by well-maintained I mean posting at least once a week)?
No comments:

So in addition to their sort-of-recently launched Friday happy hour, Meat Market will now be running these daily bar specials seven days a week from 5-8pm.
Here's the bar menu:

OYSTERS BY THE PIECE SERVED WITH COCKTAIL SAUCE AND HORSERADISH
1.50 EACH

The 40-restaurant, open-barred, crazy smorgasbord that is Taste of the Nation isn't until Thursday, so I've pretty much been fasting since Sunday. You think I'm kidding? Let's take a trip down gorge-fest lane, shall we?
Remember the Ritz-Carlton's dessert buffet for Taste of the Nation '07? I was still sweating varlhona chocolate essence days after. And what about The Oceanaire's amazing raw bar last year? Cured salmon from The Setai. Duck and shiitake from Blue Door. Kobe sliders, for chrissakes. It'll be a food-nanza. And it's all for a good cause.
In case you needed any more reason to pony up for three hours of open bar and hobnobbing with local chefs, here's a discount code that will save you $20. 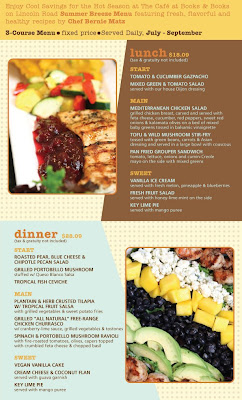 The Food Gang Is Now A Kosher Steakhouse 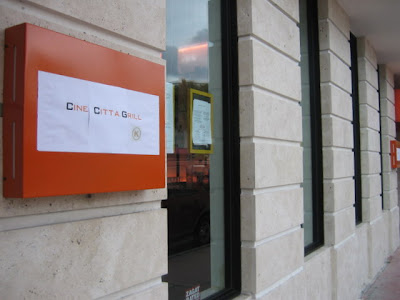 The folks who own Cine Citta, the kosher dairy spot in Surfside, have expanded their kosher-empire (koshe-pire?) and opened Cine Citta Grill, a "meat" restaurant in the old Food Gang space. The menu covers the usual kosh-meat territory - chicken dishes, pastas, steaks, salads. Mains are priced in the $30's. Peeked in and noticed that they haven't touched the decor - same fruit photos on the wall, same furniture. Looks like they didn't even have time to have new signs made up. That's cool. Color photocopies are tres classy.
2 comments:

My Night With Adrian Grenier 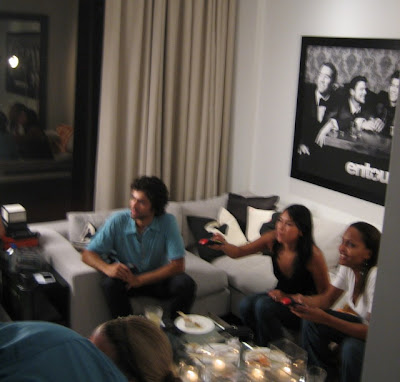 Well, actually, not so much.
Alas.
Does it count if we were both at the same party?
Adrian was too busy hosting the debut of the Entourage Bungalow at the W South Beach. And he wasn't the only cast memmber in attendance either. A tubby Rex Lee, who plays Lloyd, (or "LLOYD!" in Jeremy Piven's voice) and Perrey Reeves, the actress who plays Ari's wife (skin and bones, btw). 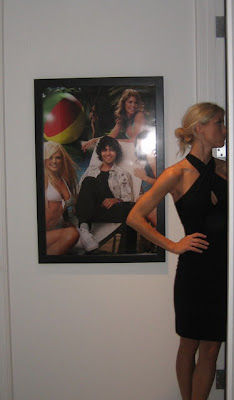 So for $10k a night you can pretend you're Vince Chase, navigating the treacherous world of South Beach nightlife while on vacay. Here's what you get:
Entourage Bungalow experience (for up to 4 guests)
Limousine transportation to/from airport
WOW Cabana at WET, including beverage and food
Complimentary dinner at Soleà
VIP access and bottle service at WALL
Courtside Coronas and reservation at Swoosh, W South Beach’s basketball court
Bliss bag of goodies
Private Cruise with full crew, lunch and limo to arrive in style
2 Entourage Bungalow branded Jet Skis
Golf foursome at Diplomat Golf Course 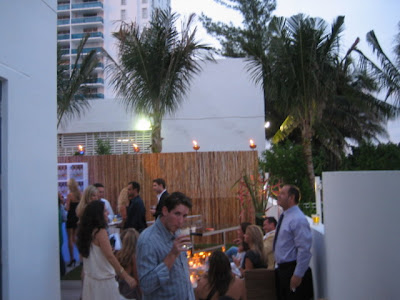 If you attended the party you got a chance to play video games with Adrian, brush up against his sweaty back (it was rilly, rilly hot out last night. I picked the wrong night to wear Krelwear. Karelle, if you're reading this, I love your stuff but deep July is not the time to break out the knits), eat your fill of burgers and kabobs at the rooftop barbecue and sip Entourage-themed Grey Goose cocktails all night long.
I think Vince would approve.
No comments:

The Mandarin Oriental is hosting guest chef Ignacio Granda Del Gallego from their Riviera Maya resort this week for a series of special menu tastings in which he's collaborating with Azul chef Clay Conley and Cafe Sambal's Eduardo Quintana. We were invited to check out the six-course dinner menu and it was interesting to see how the two chefs worked together to create a menu where the guest chef was able to strut his stuff while the home team - chef Conley - chimed in with some witty dishes that complimented the Mexican fiesta. 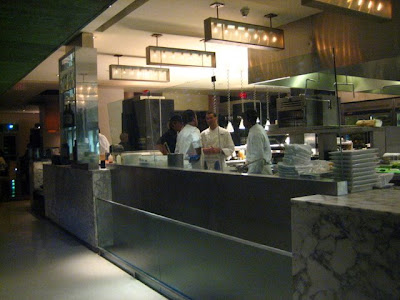 It was my first time at Azul and I was blown away by how gorgeous the place is. The Mandarin is unique because it's sort of set back from downtown on Brickell Key and it feels like it's on its own island. When you walk in the first thing you see is the sparkling glass-encased open kitchen where the chefs are clanging, steaming, and sauteing up a storm, which always gets me in the mood for a food-nanza. The dining room is a multi-level affair with marble surfaces, floor-to-ceiling views of the bay and plush seats. And they seem to be doing well in this economy despite the pricey menu and the off-the-beaten path location. The dining room was buzzing with well-dressed Latins and a table of ten celebrating a birthday right next to us. Steady business like that is probably due to good service and food, of which we had plenty. Here's the menu and my hastily-composed observations. 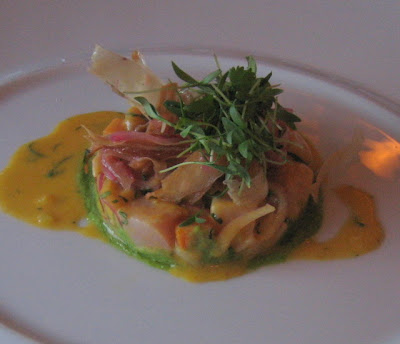 So as you can see the guest chef dominates the middle three courses with chef Conley bookending the meal with a tiradito first course (above) and a fifth "chese" course of young mimolette, a yellow cheese similar to cheddar that he coaxed into a high-end quesadilla, a playful nod at the Mexican theme.
The tiradito was an explosion of flavors - very assertive lime which is fine by me, and a Green Godess dressing which the chef said is made of cilantro, mint, dijon mustard and olive oil. The fried yuca lent satisfying crunch to the dish.
Favorite dish of the night was the porcini-crusted lamb loin. A petite portion but immensely flavorful, the meat was cooked to just medium and almost velvety in texture. The miso-quince paste lent a delicious dimension to the dish, deftly balancing the nuttiness of the miso with the caramel sweetness of the fruit. A ridiculously elegant dipping sauce.
Favorite wine was the Brandborg Pinot Noir, a nice accompaniment to the grilled lobster and its not-too-spicy poblano puree (actually I would have prefferred some more fire to the dish, though the lobster was incredibly fresh).
Portions weren't too big so when dessert came around I wasn't feeling too stuffed (but gluttonous, yes, definitely feeling gluttonous at that point). Nonetheless was able to polish off the Valrhona chocolate cake which came with pistachio dust instead of ice cream and a porcelain spoon containing a wiggly cherry "pearl," sort of concentrated cherry juice encased in a thin cherry skin.
The tasting menu is priced at $95, or $165 with the wine pairings. Yes, it's pricey but then again, it saves you a trip to Mexico...
2 comments:

Dinner Help By Way of Yelp

To get you in the Miami Spice mood, there's a little pre-party this week in the form of Yelp Restaurant Week. The bonus is that the three-course menus are only $25 which is practically the cost of valet at some South Beach joints (W South Beach, I'm looking at you and your $24 valet. That smarts, yes it does). Menus below. More info here.

Escopazzo
1. Eggplant timbale or Baby arugula salad or Beet carpaccio with celery salad
2. Pasta or risotto of the day or Large shellshaped pasta or Pennette or Crepes filled with ham, fontina cheese and cabbage or Giancarla's fish stew
3. Selection of homemade desserts 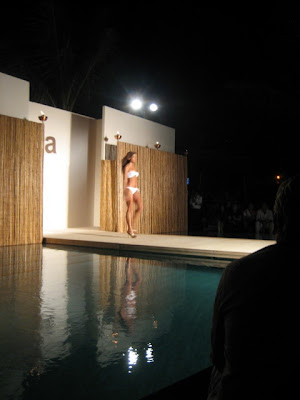 Oh hello there, you in regular-people-land.
Perhaps you haven't noticed, but our humble city has been taken over by leggy Amazonian gazelles this week. And none of them are wearing more than a stitch of lycra or python or leather or silk. And they are beyond bronze-tanned. We're talking glistening caramel-colored limbs. It's the latest. All of it was on display last night at the debut of local boutique inca's 2010 Cruise Collection.
Let's itemize what we learned last night:
1) It does not cool down at night. No, the temp hovers statically at around 90 degrees, even at 11pm which is when the show finally started (after the Grey Goose open bar shut down and a thousand hot, sweaty fashionistas nearly rioted).
2) All gift bags should contain a baggie of chocolate-covered popcorn from Peterbrooke and a Vitamin water as these gift bags thoughtfully did. Munching on the salty-sweet popcorn and chugging the water was certainly a fine way to pass the time as we waited for the show to start. Nothing beats eating chocolate in the presence of models!
3) The inca collection is super-sexy and nicely captures that Miami mix of blingy Latina hotness and Euro vacation goddess. The black leather (was it leather? it looked like leather) string bikini and one-shoulder swimsuit got the most applause while the fur-trimmed shawls seemed an odd suggestion on such a steamy night.
4) WET, as the W pool area prefers to be called, is pretty damn swank with striped cabana beds, a massive pool and a lively bamboo tikki bar. 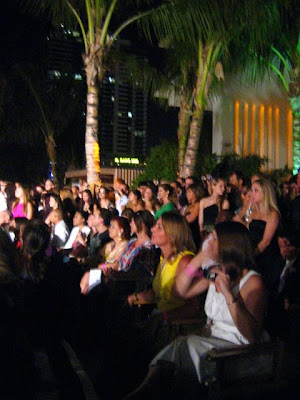 Is it just me, or are the wine dinners coming fast and furious? This one's at Eos at the Viceroy on Tuesday July 21st, 7-9pm. Vineyard is Caymus, four courses including a reception. Cost is $95 including valet. Menu is here. Enjoy.

Six courses with wines for $85 sounds liked a pretty good deal when you consider that one main course at Blue Door is usually around thirty bucks. Here's a link to the menu. 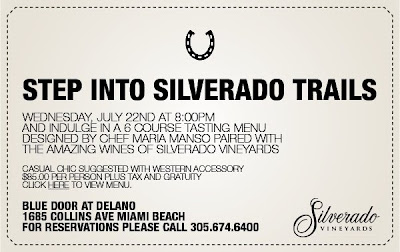 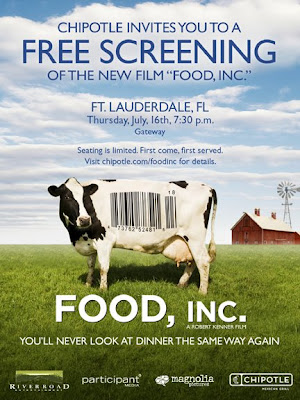 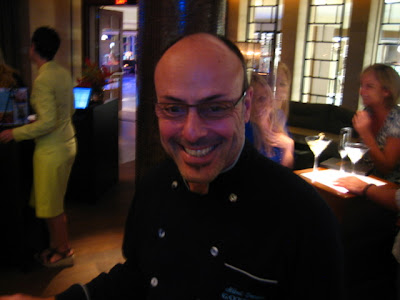 The Fontainebleau is embracing the "new economy" aka "the financial meltdown" with admirable panache. Next week they'll introduce complimentary valet for the summer (a nice gesture considering that it usually costs $10 if you're dining at the hotel), and its luxe meatery Gotham Steak chimed with a new late night menu of lower-priced snack-sized gourmet treats for the post-LIV crowd. I slapped on some lip gloss and shlepped my decidedly un-LIV self over to the megahotel to sample the goods. Chef Alfred Portale was on hand to meet and greet regarding the meat which was plentiful and snatched up by hungry media types (times are tough for journalists theses days). He mentioned that he's got a completely different staff from when they opened and he's really happy with where the kitchen is these days (as opposed to when they opened and things were a bit rushed). He's brought some chefs down from the NY restaurant and had his Miami chefs train up north in an effort to get the chophouse running smoothly. 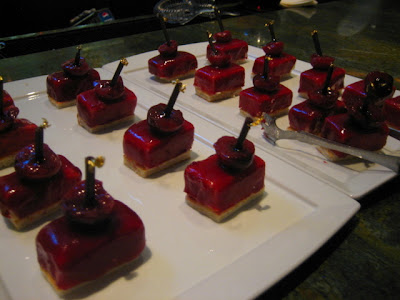 Standouts included mini-cheesesteak sandwiches made of shredded ribeye and coated ever-so-gently with provolone and onions, luscious tuna tartar in cucumber cups, steak tartar with poached quail egg (could have been spicier, but good nonetheless) and desserts like mini cheesecakes, vanilla cream-filled donut holes and chocolate caramel tortes. Washed it down with a cucumber cocktail made with Hendricks's gin and mint, a surpringly refreshing pairing.
The menu is available Friday and Saturday from 12:00am-2:30am.
No comments: 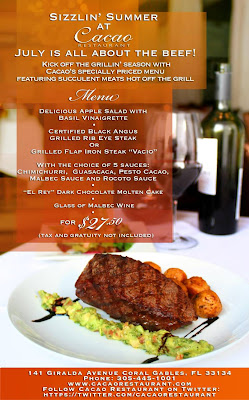 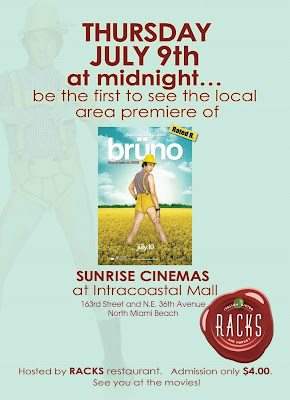 Stay at the Chesterfield Hotel for $19.99

The Chesterfield, the boutique hotel located at 855 Collins Ave, is basically giving rooms away this summer. Yes, $19.99 a night. That's not the hourly rate. It's for a full night's stay. Dang. We've had cocktails that cost more.

The $19.99 per person, per night special is valid for travel now through September 30, 2009 and must be booked by July 9. With the $19.99 per person rate, guests will receive complimentary shuttle service both to and from Miami International Airport (a $60 savings), free Wi-Fi services throughout the hotel, VIP club passes and complimentary cocktails nightly from 7 p.m. to 8 p.m. at both the hotel’s lobby lounge and Safari Bar.

There are a couple restrictions like the fact that the rate is based on
double occupancy (so I guess the room is really $40/night) and subject to a 13% tax and a daily $15 resort fee. Still a sweet deal.
No comments: 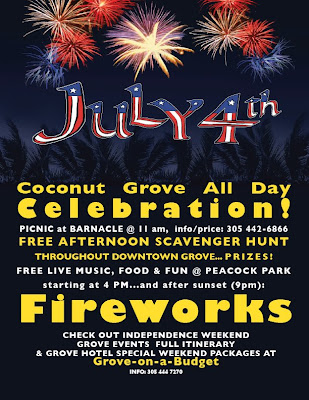 Fratelli's Open on the 4th

And they now have a full bar. So you can really get your drink on. 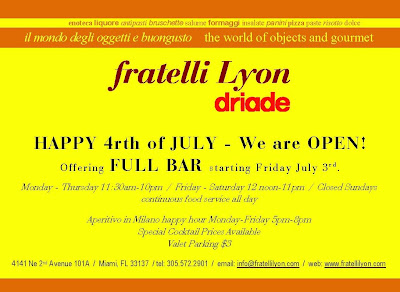 4th of July @ Cabana One 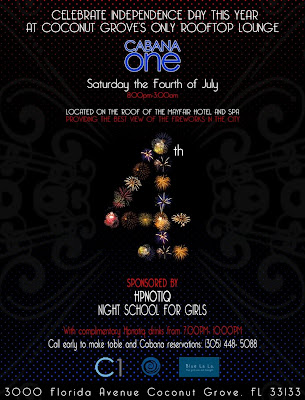