Fretting about astronomical South Florida real estate prices seems almost droll when considering the ridiculous McMansioning going on in the Gravesend neighborhood of Brooklyn where the Syrian Jewish community is outdoing itself in spending stupid money on tear-downs. Remember, this is Brooklyn, where the ghetto is always around the corner. The Syrian Jewish community is notorious for being insular and close-knit, but this article also points to another real estate trend, the proximity of an Orthodox synagogue and/or school near a neighborhood and its uncanny ability to jack up the prices.

"The location is the most important," said Marianne R. Sanua, an associate professor of history and Jewish studies at Florida Atlantic University, in Boca Raton, who grew up in Brooklyn in a half-Syrian Sephardic family. "They're willing to completely gut a house and rebuild it to the latest specifications rather than spend $5 million to buy a penthouse on the Upper East Side, which would mean nothing to them."

What, a little fine china and a fancy juicer isn't good enough for those Syrian kids? Sheesh.

Here's a tour through the cooky apartment of Amy Sedaris (brother of David and talent behind cult TV show "Strangers With Candy"). Predictably, her living space has all kinds of quirky items like fake foods on display and figurines of squirrels but the article also sheds light on her difficult past and that she's a real trooper. The film version of SWC comes out this week and if it is anything close to the cringe-genius comedy of the TV show, it will surely satisfy her legions of fans. If unfamiliar with the show, go out and rent the DVD, as it promises to make you laugh in the most uncomfortable and unexpected ways.

"Strangers With Candy" revolves around Ms. Sedaris's character Jerri Blank, which was inspired by a former substance abuser turned motivational speaker featured in a documentary Mr. Dinello found in a video store. "The film was terrible and preachy, and the woman looked like Michael Dukakis," Ms. Sedaris said. But it propelled her to start playing an overweight 46-year-old who decides to go back to high school after years spent as a drug addict and prostitute. "Strangers With Candy" is at once a wry and puerile comment on our cultural obsession with prolonged adolescence. In the film Jerri competes in a science fair in the hope that it will rouse her father out of a coma.

My favorite line from the show involves Jerri asking some popular girls what their plans are for the weekend and she phrases it something like "You doin' anything on Fri, Sat, Sun?" The social awkwardness contained in that line is brilliant.
1 comment:

Back in the USA

Bienvenidos a Miami.
Welcome back me.
In my absence accumulated 538 emails, unpaid bills, incredibly virile grass (which must be mowed this weekend, scorching heat be damned!), and 16 pounds of laundry.
Not 48 hours backs and one thing I am certain of: There is no charm, no nobility, in living in South Florida without central air conditioning. Case in point: I can grow a respectable crop of coffee beans in my living room that would make the mythical Juan Valdez quiver in his Columbian boots. Even the mini-lizards that find their way into the Wild Kingdom of a house I inhabit make their way to the quickest exit they can find preferring the sultry outdoor humidity to the stifling sweatbox I call mi casa. That's right, it's pretty friggin' hot in here.
1 comment: 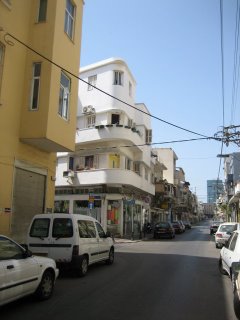 Two years ago the United Nations cultural agency UNESCO declared Tel Aviv a World Heritage site for its abundant examples of Bauhaus and International Style architecture. I still think of Tel Aviv as "crumble-ville" for its abundance of rotting, beach-weathered apartment buildings, but there are still graceful moments of architectural sublimity that occur when walking through its humid streets. It's not very clear what benefit the World Heritage designation has brought the cosmopolitan city, except for the proliferation of Bauhaus walking tours and perhaps attracting the occasional architecture nerd such as myself. Looking at this picture above, it looks a bit like San Francisco but the little pseudo-truck buggy car on the left is unmistakably Israeli.
Here's a nifty map and listings of more Bauhaus buildings in the city.
1 comment:

Location: Cafe Paradiso, 36 Keren Hayesod St.
Time:4pm
Sat adjacent to Teddy Kollek partaking of the business lunch special at Paradiso with his wife and filmmaker son Amos Kollek (I've only seen one of his films - "Fast Food, Fast Women" and couldn't help thinking how much he was trying to emulate Woody Allen in what was ultimately a lighthearted and not a neurotic enough movie to merit that association. The plot, though, about a guy who yearns to open a restaurant that charges people according to how long they sit, not what they order, was endearing.) But I digress, back to the details.

Conversation veered towards talk of Amos's horse who apparently is a stubborn thing and refuses to enter it's stable, plans for possibly taking a family trip down to the Dead Sea for the weekend (Teddy was interested in a Jeep tour possibility), and Amos trying to work out a schedule for Teddy and his wife to remember to take their medications on time. Though Paradiso is known as one of the first naughty cafes in Jerusalem (bacon and prosciutto figure prominently on the menu), none of the Kollek clan ate anything sacrilegious but rather stuck to staples like beef kabobs and potato gnocchi. For a man of 95, Teddy is quite spritely, god bless him. He wore a weathered seersucker blazer and she a printed polyester dress circa 1976. In conclusion, they were super cute and I was honored to share rustic seating space with a living legend of modern Jerusalem history.
2 comments: 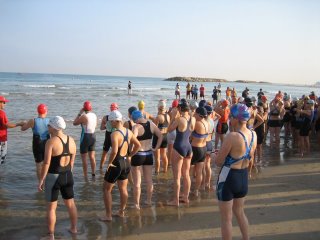 A week ago I found myself staring out into the beautiful Mediterranean Sea thinking "Yay! A women's triathlon! Girl Power! This is gonna be great!"
Two minutes later as I flapped about in the rough salty waters and was kicked by every be-capped female triathlete in Israel my thoughts quickly changed to "This is it. I'm not gonna make it. They're going to have to rescue me in their special rescue-kayaks and I'm going to be the laughing stock of the triath-community." Luckily my Darwinian impulses kicked in and I was able to make to the Herzeliya shore doing the backstroke ( I know, an illegal stroke for a triathlon, but come on, I was dying out there). I made it to dry land just behind a one-legged competitor and a few post-menopausal women, but hey it's all about girl power, right?
After that, the rest of the competition was a breeze. The bike ride was pleasant and the run sufferable but ultimately doable. The best was finishing with my friend Tali, hand in hand, and I'd do it again, any day. Just not today, ok.
2 comments: 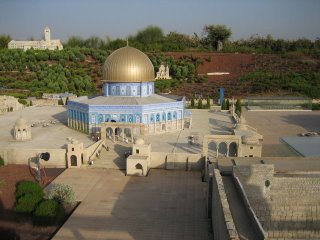 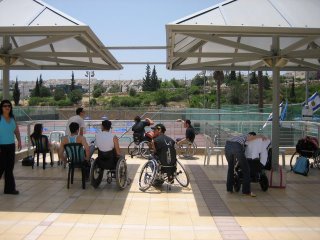 A little-known gem in Jerusalem is the Merkaz Tennis next to Teddy Stadium (named for former Jerusalem mayor Teddy Kolleck). The day I was there also happened to be a tournament for wheelchair-bound players. A fun time was had by all.
1 comment: 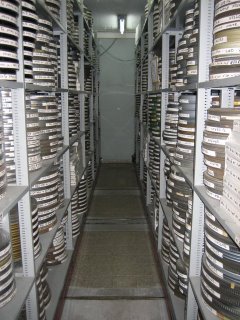