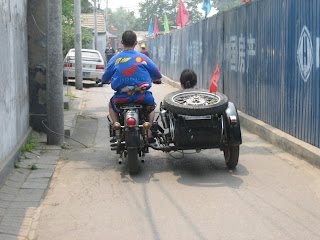 We are now day 8 into filming. Ideally I would have updated this blog regularly, giving you all the saucy details of the daily trials of movie-makin. But at the end of each day I am tired and filthy; all I want is a shower and a giant Tsing-Tao beer (the convenience store in our building only sells beer in the 40 oz size which suits me just fine). The other day someone suggested that making a low-budget film would make a great exercise for sixth graders (anything older would be giving film making too much credit) - it's all about problem-solving, team management, budget management and leadership skills. And ultimately, it's tedious, time-consuming work. But some days it's enormously rewarding like when we film the actors on bikes riding around Beijing and commandeer a Kabob stand and get the local skewer lady to act in the movie. On those days you laugh so hard you almost drop the camera and come home having gotten to know the city a bit better through this new lens.
Here is a still from our first day. Our male lead, Thomas Lim (right) is a famous Chinese actor from Singapore. The dude on the left was a hired gun, a character-actor, he came in for a few hours and gave an impressive performance as Thomas's petulant father figure. 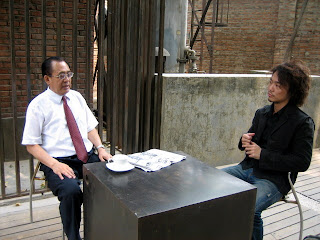 Lunch for the crew at a no-frills Muslim restaurant. Our bill for 5 people including beers came to $9. 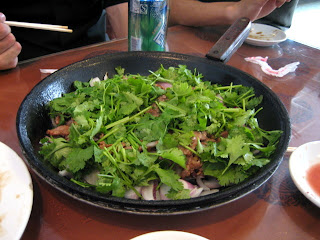 I think this was Mongolian beef with onions and cilantro. A friends explained that Muslim food is like the Chinese food of China, it's really common and semi-exotic. To me, it tastes really similar to the stuff we eat in regular Chinese restaurants but I am more comfortable eating there because I know there's no possibility of pork juice being in the food.
Then we headed to the Great Wall to film a pensive scene with Thomas. 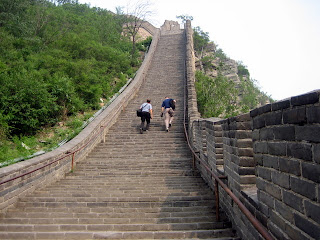 That day we also had the help of Emmy-award winning camera-man Rick Tullis, a guy whose athleticism outdid all of us. We were huffing and puffing up the massive stairs as Rick dangled from the walls getting breath-taking shots. 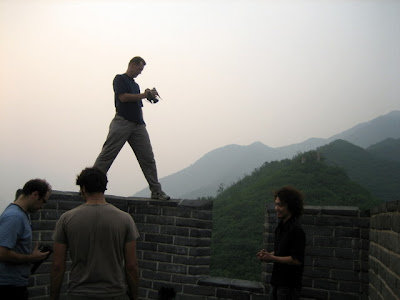 Climbing this strestch of the Great Wall is like being on a stairmaster on steroids. Good luck, Olympics tourists. 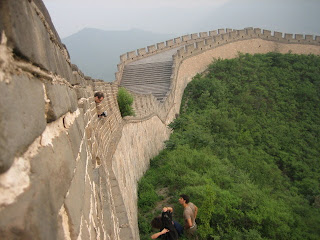 After we finished and climbed back down we came across this wishing tree; people tie red ribbons to the branches along with hopes and wishes. 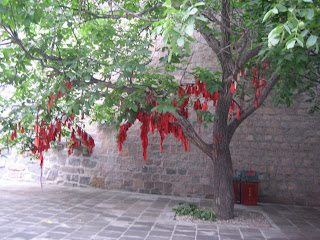 SARA!!!!! Jealousy is not even the word to describe how I feel. I am slaving away in summer school and you are living the life! I want every detail when you get back.
Simi

Hey Simi, summer school sounds kinda nice. Can I still count on you as back-up crew for our next production?