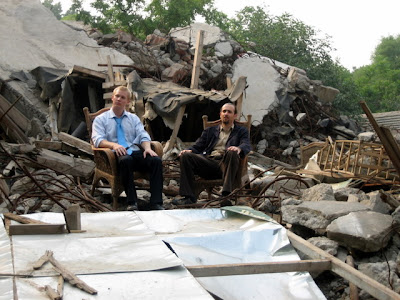 We're calling the film "Foreign Devils," a rough translation of the Chinese word "laowei," a term used to describe Westerners. The plot interweaves the storylines of both Western and Chinese characters. It's an interesting challenge balancing the narratives of a diverse group of people. Our movie also takes place on a 24-hour timeline which makes some things easier - wardrobe stays the same for everyone, continuity issues are minimized - and other things really difficult like matching the right outdoor light to the time of the day in the movie. We are all over the place on this one, mostly because scenes can be unpredictable and light is constantly changing. Plus, Beijing pollution makes every day a gamble; some days it's sunny, other days the smog and haze make the city look like a gloomy metropolis.
The more I get to know this city through the filming, the more I come to appreciate the multitude of possibilities here. Because the city is densely populated and filled with history, you never know what you'll find. The photo above was taken on our second day of filming with our two leads. We happened upon this garbage heap with two wicker chairs perched atop, presumably, their final resting place. Our actors are a hearty bunch, game for anything, and braved the mess for some impromptu pics. Next, we filmed the two of them riding on a single bicycle around Houhai Lake. This was accomplished by riding behind them with a camera clamped to a second bicycle. Guerrilla film making at its best. 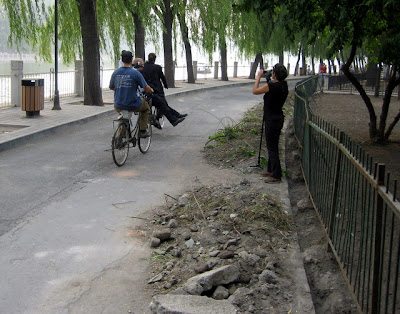 Hi Sara, Iam a filmaker also if you ever need a collaborator etc... let me know.
peace,lisa