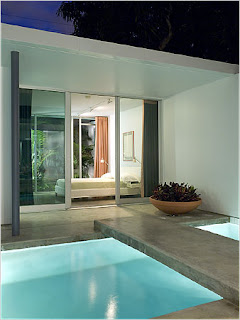 The NYTimes explores Terrence Riley's sunny splashy Mies van der Rohe house located in the Design District. The house looks exquisite and more Mies in Miami is always a good thing, but the sad unspoken truth is that the people who build these architectural gems in the Design District and Wynwood (like the Rubell's massive complex including a lap pool and tennis court behind their warehouse collection on 29th st.) live essentially in concrete fortresses. The articles sort of touches on that but really skirts the issue:

No one passing Mr. Bennett and Mr. Riley’s concrete-fronted house would call it off-putting, despite the near total lack of transparency. And, with each house using nearly all its lot, it does seem like a sensible way to achieve both dignity and privacy in a dense city with a suitable climate.

It's also anti-new urbanism to completely ignore the neighborhood where your house is situated. Riley's house (below) may be acceptable to the cultural elite, but its essentially the high-design version of a McMansion, with the same disregard for neighborhood cohesion that critics of trophy houses always bemoan. Oh, and next time you're at Riley's pad, make sure to bring your bathing suit. 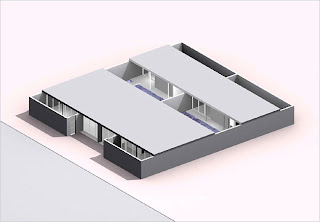