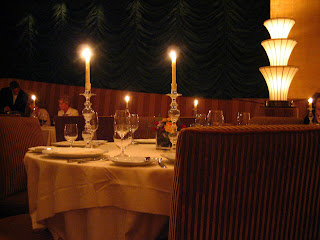 David Bouley has brought classy back to Miami. And it's about time. The acclaimed Manhattan chef has raised the bar for upscale dining in our humble city and as the recent spate of high-end restaurant openings atest, Miami is ready to eat well. His new restaurant David Bouley Evolution, located at the Ritz Carlton in South Beach is plush, sophisticated and not for the faint of wallet. That said, once you have resigned yourself to spending a small fortune on incredibly well-executed food (which is actually comparable to prices at other popular spots like Barton G's and Prime 112) it is possible to sit back and simply enjoy one of the most sublime dining experiences in our "glorified sandbar" of a city.

Architect Jacques Garcia designed the formal dining room with a mermaid-chic sensibility using sea-anemone chandeliers, deco light fixtures and glass accents. All the windows are draped, giving the restaurant a luxurious submarine feel, though after a while it feels a bit like you are in the private dining room of a character from the League of Extraordinary Gentlemen. I kept waiting for Sean Connery to materialize along with the food which took an exceedingly long time to get to the table. But it is really forgivable given the magnificent end result of what actually ends up on the table. And the fact that for the time being Bouley himself is in the kitchen cooking this amazing food. He even made an appearance in the dining room, coming around to chat with guests. I swooned like a schoolgirl when he stopped by to explain how he imports his fish from the Massachusetts coast. Me being a Boston dame, we had a nice reminisce about Beantown. Sigh. He really is quite dashing.

Bouley has already proven himself a worthy contender with successful Manhattan restaurants Bouley, Danube and Bouley Bakery. His French heritage and days working with fishermen in Cape Cod shine through in sumptuous seafood creations - Chatham Cod pairs nicely with kumquat and parsley root puree, a small pool of Tasmanian mustard sauce providing adequate tang to the expertly cooked fish. A seemingly odd combination of Monkfish and borscht (below) actually works well with the Russian beet stew adding gorgeous color and sweetness to the pleasantly meaty fish. 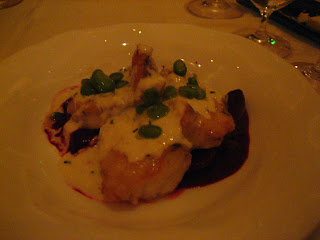 As dinner progressed it seemed Mr. Bouley is fond of deep wine-colored sauces, such that after the monkfish dish and its palate-cleansing follow-up, a concord grape sorbet (below), which was cool, fruity and so refreshing I wished for more, the diner is left with a swirly dark purple mess at the end of the dish; beautiful and surprising in its uniqueness. 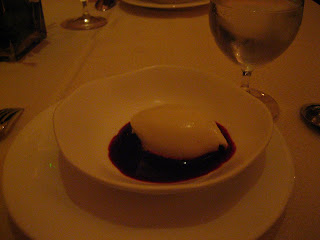 Appetizers were not all equally enthralling. An eggplant terrine with red bell pepper and Vermont goat cheese arrived as a precious slice, too meager and dainty to last very long. Same goes for the tuna carpaccio; high quality fish, but a little too safe. The yellowtail appetizer with hon shimeji mushrooms and ginger sauce , however, was brilliant with incredible depth and imagination and above all, pure deliciousness. That ginger sauce caused me to lick the plate clean with half my french roll, unladylike, I know, but acceptable in the elegant surroundings. That's because despite the posh decor and the socialite crowd, Bouley's establishment is above all about the food, and the enjoyment of those natural elements so often overlooked in cooking.
Attention is also lavished on dessert, lest you think Bouley would phone it in with the usual molten chocolate cake. Instead there is a delectable trio of creme brulees - banana, green tea and Tahitian vanilla - all smooth custardy goodness with the crunchiest of tops. The chocolate brioche pudding is absolutely hedonistic in its decadence. A red pepper chocolate sauce adds fire to the richness.

Service is incredibly attentive, maybe too attentive, but that's not so bad given the usual level of service in South Beach. Polite, courteous and at times friendly, the staff do their utmost to ensure your every need is accommodated. The wine list is extensive with reasonable selections for $45-$60 and of course ascending upward. Appetizers range $14-$18, Entrees in the $30 range, desserts $13-$16.

Email ThisBlogThis!Share to TwitterShare to FacebookShare to Pinterest
Labels: Restaurants

you have become quite the foodie. perhaps a career as a restaurant critic?

Hah! It's one of my many writer hats these days....