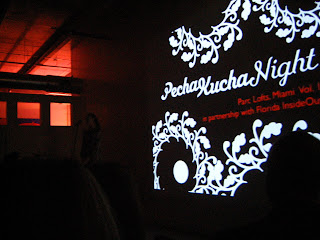 Sometimes all you want from art is the story; at the very best it's entertaining, at the worst it fizzles, but the narrative behind the art is usually more compelling than the work itself. One of the best events of last week's parties-with- a-dash-of-art was Inside Out Magazine's Pecha Kucha. An event imported from Tokyo's SuperDeluxe (a delightful space in Tokyo), it involves artists, designers and architects giving rapid-fire presentations of their work or whatever interests them. The rules are 20 slides and only 20 seconds to talk during each slide. It was a bold move to organize this event in Miami, a place not known for its lecture-hungry crowds, yet the audience behaved (for the most part) and despite the absence of blue-chip speaker Jacques Herzog, the event was brainy fun.
The Art Basel version featured a great roster of speakers - lots of witty Brits, Miami artists Federico Uribe and Cristina Lei Rodriguez (who seemed charmingly earnest compared to the biting humor of the Brits), an Israeli (Gal Benshetrit sporting a leather jacket and talking about the duality of black and white) and assorted European and Latin American artists.
Highlights of the evening include Barnaby Barford's sight-gag ceramic figurines, Marcus Fairs giving the audience a tour of his house and the many high-design lamps and furniture pieces that have needed to be replaced because of, well, bad design. (example: a Tord Boontje plastic chandelier that has melted from its own lightbulbs), and Spanish designer Jaime Hayon declaring "Fuck design, fuck style, I want a mix." The night got rowdier as everyone patronized the open bar (and the crowd thinned out after intermission) and it was a rollicking good evening of powerpoint and "pechacha," Japanese for chatter. 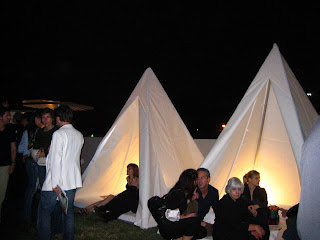