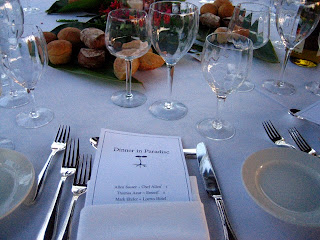 A few weeks ago a group of bout 60 people met on an idyllic organic farm in Homestead, a farm that provides many of Miami's top chefs with their fresh, healthy, pesticide-free produce, for a candle-lit dinner that was both a feast for the eyes and palate. This was Dinner in Paradise, a fundraiser and culinary happening started by Michael Schwartz of afterglo and Nemo and the soon to be opened Michael's Genuine Food and Drink. 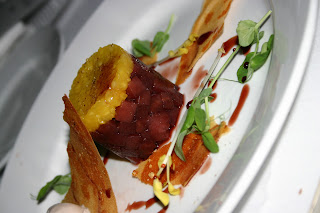 The idea is to pair the city's great chef's with the fresh seasonal produce of Paradise Farms. The chefs take turns designing the six courses and the result is a dining experience that easily shifts between the rustic and romantic. That night Allen Susser (Chef Allen’s), Tom Azar (Emeril’s) and Marc Ehrler (Loews Hotel) were the captains of the kitchen each bringing their respective talents to the table. The cooking and the eating happens outdoors with the various heirloom tomato plants and succulent avocado trees not far from the Gazebo dining room. Dinner rolls were provided by La Provence Bakery in South Beach (the crusty olive oil mini-baguettes are addictive). First course designed by Marc Ehrler was organic port pear tartare with stilton crunch, a creative stand-in for ubiquitous tuna tartare. Chef Allen followed that with baby brassica and edible flowers, and asian turnips dressed with mandarin citrus vinagrette. The micro-greens were almost poetic in their crunchy perfection. Tom Azar wowed the crowd with seared pompano, gnocchi, sweet tomato-basil sauce, micro pea tendrils, shaved pamigiano (below). 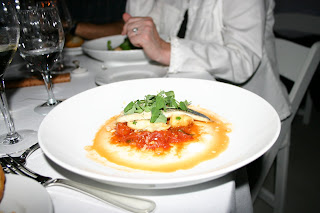 Fantastic wines, including a pleasing selection of fruit wines from neighboring Schnebly Winery, are paired with each course. Service was impeccable, with each course coming out in timed precision, preceded by an introduction by the chef that had created it. One of those Schenbly wines was put to good use by Chef Ehrler in a chilled lychee sangria with whipped mascarpone and coconut rock. The creamy goodness of the mascarpone combined with the sweetness of the lychee wine could easily have passed for nectar of the gods. Chef Azar's dessert of organic banana cream pie, caramel sauce and chocolate shavings was the delectable culmination of a foodie's dream come true. 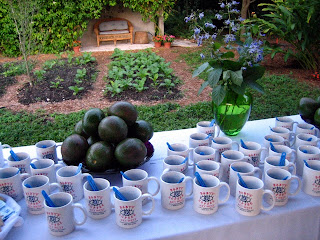 The combined effect of this gastronomic collaboration is that you actually get more in touch with what you're eating; you see the hothouses where the micro-greens are harvested, you meet the visionary chefs that labor over the food in the beautiful open-air kitchen. And as the crickets chirp into the breezy winter air and you get to know your fellow diners over amazing food, you realize how Dinner in Paradise really lives up to its name. At the end of the night, the diners made their way out down a stone path carrying an organic party favor - 2 enormous Monroe avocados and a mug of organic coffee from Baby's Coffee of Key West (above).
And added bonus is that proceeds from the dinner benefit Earth Learning, an open learning community and a practical organization that attracts, inspires, creates, and sustains people, ventures, projects, and activities dedicated to earth literacy and sustainability in the Everglades bio-region.
Next dinner on January 14 features Alberto Cabrera (Karu&Y) and Michael Schwartz (Michael’s Genuine Food & Drink). Reservations at (305) 573-5550.

The January 14 was fantastic as well!