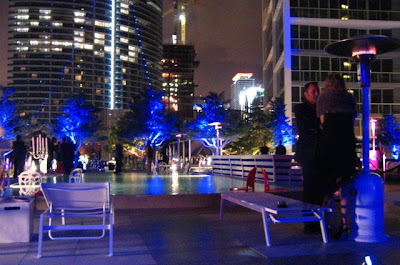 Last night's mega-bash at the Viceroy Miami was a welcome throwback to the glitzy condo parties of yore. Sure it was a hotel opening, but the star of the show was the combined magnificence of the ICON Brickell in all its three-tower glory. We got there a little before 9pm and the celebs were already comfortably ensconced in the 15th floor restaurant munching on beef empanadas, mini-burgers and sushi. Spotted designer Kelly Wearstler (tiny!) and wearing a very short Grecian dress but pulling it off with a slamming pair of legs. Not only is she a design guru, she's friggin hot. Speaking of hot, Don Draper was in the house but sporting hair that was on the greased-back longish side. Whatevs, I'll take D-squared any time, any day. He and his g-fly must have really enjoyed the outdoor Yerba Buena concert by the pool because they parked their keisters on the massive couch and didn't get up once during the performance.
And who could resist the band's lead singer, all caliente charisma with an amazing voice. She started out the show by saying,
"This is a time of crisis but we are going to survive this. And tonight all of you will go home and make love!"
Amen to that.
Sharon Stone, looking a bit on the alien-side of human, did retreat back into the restaurant during the concert and proceeded to have a late dinner while party goers shyly tried to talk to her. I walked straight at her table not realizing who she was and she gave me a very thorough once-over and then a smile, or as close to a smile as a half-woman, half-cyborg can give. Selma Blair hung out outside wearing her date's suit jacket (it was mad windy out there) and then disappeared up to Club 50. Brett Ratner was also shuffling around with some chick. Local socialites included Iran Issa Khan taking snapshots of attractive young people, Ingrid Hoffman being the sprite that she is and Emilio Estefan on stage for an impromptu bongo session. Dude can't resist being a ham, can he?
All in all a really magical night where celebs and glamorous locals mixed in the cool Miami breeze, perched at the mouth of the Miami river, observing the flickering lights of a city built on visions of the future, a future that hopefully can sustain all the grandiose hopes of its visionaries. (Poor Jorge Perez, by the way. A Latin Gatsby indeed.)

I really enjoy your blog. Your posts are unique, varied and interesting.