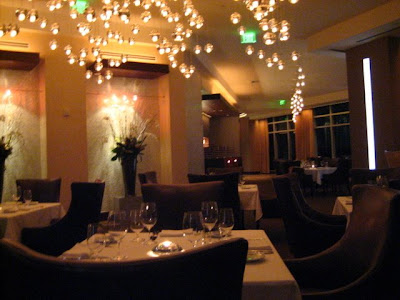 1 Bleu at the Regent Bal Harbour gets a lukewarm review from the New Times this week but I think it deserves a bit more credit. The place has already been through a few chefs in its barely year-old existence and now that Mark Militello is in the house there's finally a feeling of stability to the posh digs. On a recent visit I found the menu refreshing in its simplicity and admirable in its efforts to actually present entrees in the $20 range (this from a hotel with rates that start at $500 a night). The service at the restaurant is ridiculously accommodating (it helps that the place is well-staffed, and well...not that busy) which is nice if you're looking to be attended to in a non-obsequious way.
We started with the mozzarella platter that comes with luscious yellow and orange organic heirloom tomatoes and a generous drizzling of fruity olive oil and a selection of salts that add crunch and texture. 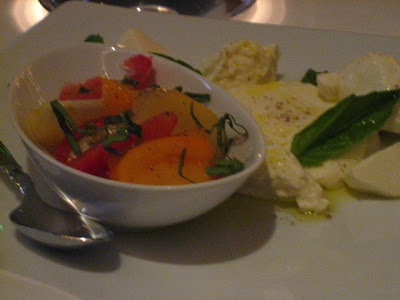 The seared tuna is paired with an earthy wild mushroom sauce which at first seemed odd as we're so used to the Asian-inflected soy marinades but it worked quite well, standing up to the sushi-grade fish. The crab-crusted grouper is a holdover from the mythic Mark's menus and it still works, especially with a kicky horseradish sauce to temper the shellfish-and-meaty-fish combo. 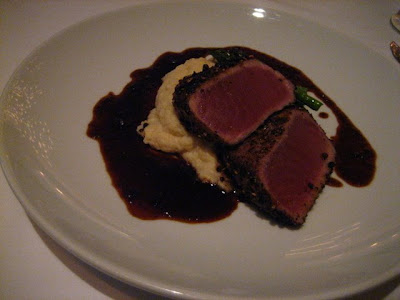 We ended with a sort of revamped banana cream pie dessert composed of banana custard, whipped cream and banana ice cream. All of it well-balanced with sweet, creamy and fuity notes and not as maniacally banana-overloaded as it sounds. 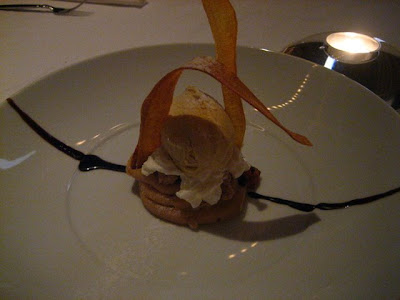 So yes, I think 1 Bleau is off to a good start with Militello in the house.