Cooking With Tom Azar @ The Biltmore 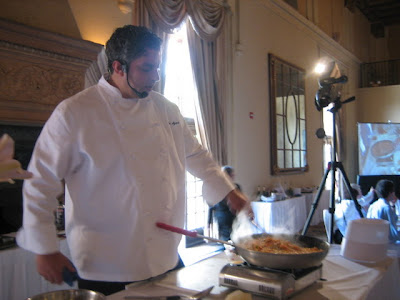 This past weekend chef Tom Azar of the soon-to-open Ahnvee Restaurant in South Beach gave Biltmore Cellar Club members and curious foodies (that would be me) a sneak peek of what to expect when his New Orleans-influenced restaurant opens. Granted, the cooking was actually being done by participants, not Azar, but the genial chef made sure to give good instructions from his demo post and to come around to each table to introduce himself and see how things were going. And of course, all the recipes were his.
On the menu:
Black and Blue Beef Filet with a spritely salad of julienned carrots and radishes seasoned with creole seasoning and rice vinegar. The aioli topping for the beef was a tart dressing perked up with limes, Tabasco, Worcestershire and more creole seasoning. 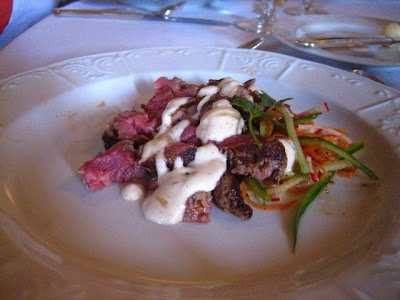 Next was a Louisiana crawfish etouffee over white rice. Our tablemates whipped this one up with admirable finesse mixing together the crawfish tails, white wine, seafood stock, bell pepppers, onions, celery, a bit of flour and creole seasoning. The stew had the perfect peppery-briny kick and got me excited for the massive crawfish boils Azar has in mind for the restaurant's grand opening. 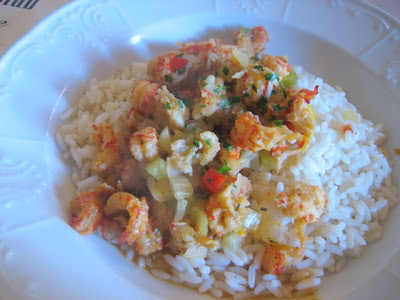 And though dessert was pre-made it was no less easy to polish off seeing as how it was composed of hazenut financier (basically a hockey puck of cake) topped with Rocky Road gelato and caramelized hazelnuts. 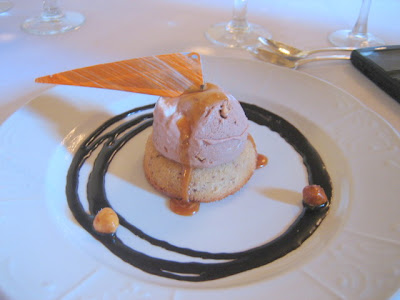 Def keep me posted on the opening of Ahnvee. I love me a crawfish boil, ya hear?

Will do. You'll soon get your crawfish on, trust me!