People in the food world shy away from using the word “fusion” these days. The term became too trendy, was never quite defined and is ubiquitous in restaurant descriptions. It takes a trip to Sushi Samba Dromo to remind us all that fusion cuisine can be exciting, flavorful and full of unexpected promise. The restaurant developed back in the day when fusion was a ground-breaking phenomenon, and despite its status and the older and wiser doyenne of Lincoln Road's upscale eateries, a meal at Sushi Samba proves that the Asian and South American-influenced eatery has not lost its mojo or its ability to churn out respectable fare.
Known as a restaurant with a nightclub atmosphere, the South Beach outpost of the Sushi Samba empire now has to compete with the recent openings of Quattro and Santo, not to mention the all the foodies hopping across the bay to Michy's and Michael's. But the prime location on Lincoln Road makes those orange umbrella-adorned tables satisfying both for the good food and people-watching.
The restaurant offers a traditional nightly omakase menu, a Japanese term for a chef's choice. Either 5 or 7 courses, the dishes range from kobi beef tataki to duck wontons to imaginative sushi creations. Ordering from the usual menu will also yield a fine tasting odyssey but the better value may be in the omakase as Sushi Samba's prices are not for the faint of wallet.
The décor is fun and chic, though it could use a refacing in certain areas. Lighting is dim, and salsa music pulses throughout the vast multi-tiered dining room. The circular sushi bar in the center of the restaurant functions as a visual spectacle and additional seating. 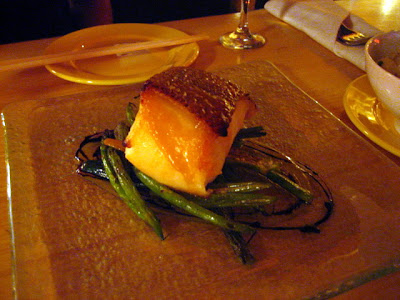 The menu features some unlikely combinations of Japanese, Brazilian and Peruvian staples. Steaks and seafood are available as entrees (like the filet of Chilean sea bass, above) and we spied several tables ordering the generous lobster platters. But the real fun is to be had ordering a melange of small plates. The Chilean sea bass “anticuchos” skewers is one of the heartiest small plates boasting 2 generous hunks of miso-marinated fish resting atop oversize kernels of Peruvian corn marinated in butter and lime. The yellowtail sashimi “Tiradito” is worth the trip to Lincoln Road alone. Bathed in a tart lemongrass sauce, the thin slices of fish are enhanced by slivers of jalapeño peppers and the citrus sauce. The Kobe beef tataki comes relatively unadorned save for a drizzle of truffle oil allowing the flavorful meat to assert itself. A tuna ceviche with almonds, red onions and grapefruit juice practically sprung from the plate, it was so fresh. A sampling of the tuna tartar with red pear jus and garlic soy attests to the fact that the kitchen has a sure and steady hand when it comes to raw fish. 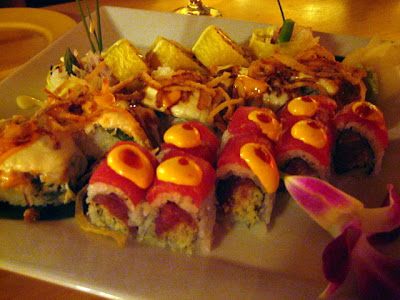 The sushi menu is where the fusion combinations have an opportunity to dazzle and highlight the best of both worlds. The “Neo Tokyo,” composed of yellowfin tuna and tempura flakes, is given a fiery jolt with a topping of aji panca sauce, made with Peruvian chili peppers. A “Green Envy” roll is an inspired collaboration between tuna, salmon, wasabi pea crust and a fantastic aji-amarillo-key lime mayo. The “El Topo” was less impressive, consisting of a beguiling mixture of salmon, jalapeño, shiso leaf and topped with an elastic mozzarella cheese and crispy onions proving that cheese and sticky rice are not a magical match. Of the side dishes the most unique is a bowl of that same Peruvian corn, the massive kernels snappy and full of depth. The sweet plantains and purple mash are also nice counterparts to the protein-packed menu.
The sake menu is superb, from Junmai to Nogori (cloudy sake) selections with enough choices to satisfy a tasting flight. The restaurant has also begin offering several “virgin” cocktails, each refreshing and non-hangover inducing. The “Acai Fizz” packs the most nutritional punch using antioxidant-rich acai berry puree and topped with a splash carbonated energy drink. The watermelon “mojo” martini is crisp and flavorful enough to stand on its own sans alcohol.
Dessert selections cover usual territory, from a perfectly balanced tre-leche (below) to a warm chocolate banana cake but the most compelling reason to stay for dessert would be the green tea ice cream, as rich and fragrant as the drink itself. 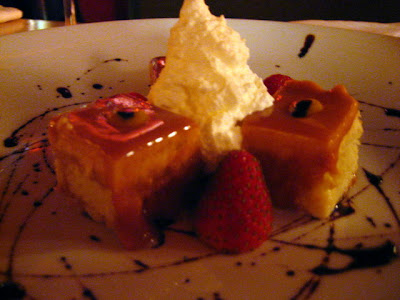