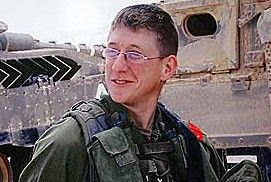 Today is Memorial Day in Israel, a time to remember the 22,305 soldiers who have died in combat or in Arab attacks since 1860. There is an ambient sadness in Israel on Memorial Day. The radio stations play sad music all day long, the TV channels run documentaries and shows about the wars and soldiers that have died. Like Holocaust Remembrance Day there is a 2-minute siren of silence where everything, everyone stops and stands silent to remember the dead. This Memorial Day is particularly raw since it commemorates the soldiers who died in Lebanon this summer, including Uri Grossman, who died at age 20 along with 34 other soldiers in the last weekend of the war. Uri was the son of Israeli author David Grossman, a noted leftist peacenik and the author of Someone to Run With, a book that every Israeli teenager reads and loves, much like Catcher in the Rye. I recommend picking up a David Grossman book if you're interested, as his writing is powerful. Here is an excerpt from the eulogy he wrote for Uri:

At twenty to three on Saturday night, there was a ring at our door. Over the intercom, they announced themselves as army officers. We had already been through three days when almost every thought that entered our minds began with a negative. He won't come. We won't speak. We won't laugh. There will be no more of that boy with the ironic grin and the crazy sense of humor. No more of that young man with wisdom beyond his years. No more warm smile and no more healthy appetite. No more rare combination of determination and delicateness, no more shrewd common sense and wise-heartedness. No more the infinite gentleness of Uri, and no more silence in which he could calm the stormy atmosphere. No more watching The Simpsons and Seinfeld together, and no more listening to Johnny Cash. No more of your strong hugs, and no more seeing you walking with [your brother] Yonatan, gesticulating wildly as you speak. No more hugs for your beloved [sister] Ruti. No more. No.

Uri, my love, throughout all your short life, we have all learned from you. We learned from your strength and your determination to go about things your own way. To follow your own path even if there was no chance that you'd succeed. We observed in astonishment as you fought to be accepted to a tank officers' course. You were not prepared to be satisfied with giving any less than you knew you were capable of giving. And when you succeeded, I thought, here is someone who knows his abilities so simply and so soberly. Someone with no pretenses and no pride. Who is not influenced by what others say to him. Someone whose source of strength is lodged firmly within himself.

Proudly supporting our troops via eMailOurMilitary.com