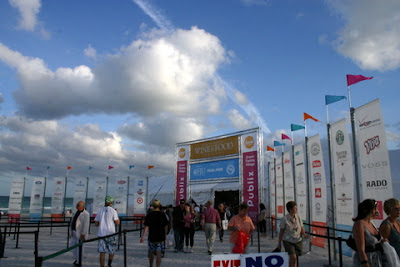 The Publix Tasting village at 4:45 Saturday was full of rilly, rilly happy people. Or rilly, rilly, runk people. Either way, everyone was wasted away in Margaritaville. I had approx. 15 minutes to get my blood alcohol level up to par with my SoBe Food Fest cohorts and unless I was about to chug a magnum of Pierre Jouet it wasn't happening. Luckily the Club Med food tent was still going strong and I managed to taste some delightful white chocolate French toast with raspberry coulis and sip some French wines. But I refused to wear the wine glass around my neck. 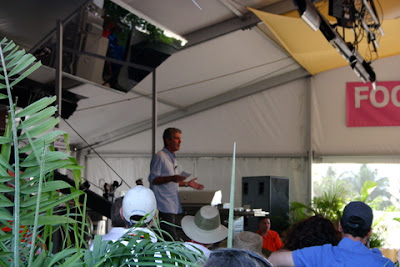 I did get a chance to see some of the Food Network personalities that have made this fest such a destination. Mr. rock star chef Anthony Bourdain was holding court to an overflowing tent for his session of "Blunt Talk." It was basically this blog rant with enough pauses built in for the sloshed crowd to whoop it up. Example:

PAULA DEEN: I’m reluctant to bash what seems to be a nice old lady. Even if her supporting cast is beginning to look like the Hills Have Eyes--and her food a True Buffet of Horrors. A recent Hawaii show was indistinguishable from an early John Waters film. And the food on a par with the last scene of Pink Flamingos. But I’d like to see her mad. Like her look-alike, Divine in the classic, “Female Trouble.“ Paula Deen on a Baltimore Killing Spree would be something to see. Let her get Rachael in a headlock--and it’s all over.

You get the picture. I walked away in time to hear Bourdain answer what he thought of Rocco Dispirito "The man can cook," Bourdain generously asserted. And lo and behold who was in a neighboring tent, but Mr. Dispirito himself, svelte (apparently he's training for an Iron Man triathlon, and when he chops those onions, those biceps are bulging), and incredibly fun to watch. 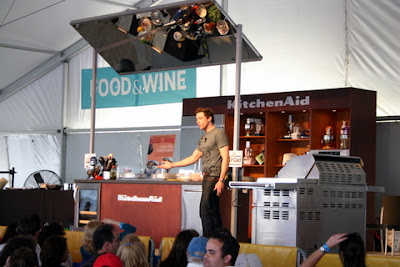 He handled himself splendidly given that his audience was 99% women in their late 30's who were 100% pickled. As he went about demonstrating quick and easy recipes poor Rocco grinned sheepishly when women in the audience yelped "Rocco do you have a girlfren?" and even fielded a few ass slappings from his enthusiastic volunteers. "I think she's leaving on a jet plane," Rocco chuckled.
Oh, Rocco, what hath the wrath of Jefferey Chodorow wrought? But he's still just as charming and boyishly handsome as ever, and given his obvious talent with food, his career still has plenty of potential.

Email ThisBlogThis!Share to TwitterShare to FacebookShare to Pinterest
Labels: food

Bourdain is my hero. If it wasn't for his book "A Cook's Tour" I would have never considered going to Vietnam which was the most rewarding, mindblowing and delicious experience of my life. I hope to one day thank him in person.

I hear what you're saying Harry, but he's sort of sleazy in person. I had a little convo with Bourdain later on that day, will post about it soon.