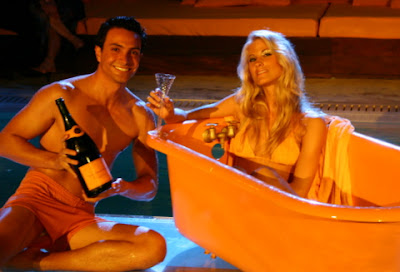 I have to say I was not impressed. Maybe I expect more for a party with a $175 pricetag (which I thankfully did not pay) or perhaps I desire more spectacle from my Miami mega-parties. Let me break it down for you. The setting was the triple-pool area of the Setai's expansive backyard. In each pool were positioned "Bubble Girls," and their orange swim-trunked male champagne slaves. Basically the guys spent the night going back and forth from each bubble queen pouring them champagne. Ok, that's a spectacle, I guess...I mean, how different is this from a typical Art Basel party? This year we had Dita Von Teese riding a mechanical bull. Now THAT is a paw-tee! 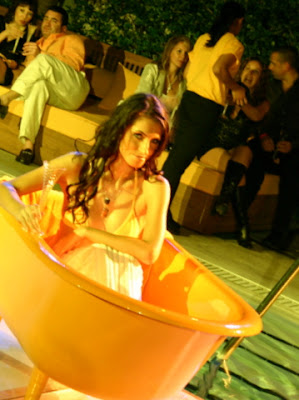 Maybe if the bubble girls actually did something besides sit and preen in those tubs. Well, scratch that, they did do something - get incredibly tipsy on all the Vueve Clicquot. Those poor dears were so wasted that by the time food materialized (after an hour and half) in the form of passed hors d'oeuvres the bubble girls were flailing their arms over the tubs trying to get a veggie spring roll or seven.
The champagne was definitely flowing. If people came intending to drink their ticket price in booze, it was certainly possible. (Given that a bottle of VC goes for $40 you'd have to drink four... which I sorta did.) The bars were well-stocked and there was a plethora of of models dressed in orange mini-bathrobes pouring champagne for anyone with a plastic flute. I have to give credit to the Setai staffers for their incredible patience and professionalism. They really were the only people working the party who were not sipping the bubbly and it showed. They navigated the pool areas with trays of tuna tartare, shrimp shumai and beef skewers like champs. And the crowd was what you'd expect - not local. It's mostly out-of-towners that pay the astronomical prices for these SoBe food fest events. And most locals are not as blown away by girls in bikinis pouring drinks. Let's hope the other food and wine-focused events are better value for the money, otherwise it seems this little food fest that could is getting a bit bloated.

I feel like you and I went to two totally different SoBe festivals.