IDEAS: Intellectual Nourishment in the Grove

I have been hearing many good things about IDEAS. Last week I had a chance to have dinner there and see for myself. In the case of this new Spanish restaurant in Coconut Grove, the reviews are right on.
In service, décor and culinary wizardry, Ideas is top notch. Chef Alvaro Beade executes Spanish cooking from the Castilla y Leon region with a confidence and elegance that is both accessible and lofty. From the page-long list of Chef’s suggestions (thankfully translated into Spanish on the reverse side of the page) to the standard menu, the selections at the restaurant marry old and new ideas about traditional Spanish cooking. Red wine braised veal cheeks are accompanied by baby lima bean ragout while Mediterranean Sea Bass (below) is dressed with cauliflower parmentier and wrapped around a Castillian “pisto,” a ratatouille-like mixture of zucchinis, onions, and tomatoes. 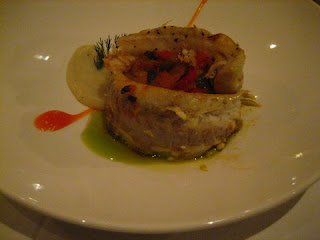 The owners have done a great job of transforming the space, a nondescript clapboard house on Bird Ave., into a graceful fine dining destination. The dining room is a mélange of beiges and soft creams in the form of warm travertine floors and flowing drapes. The lighting in the restaurant is just dim enough to make anyone look sultry. The air is blessedly music-free so you can have normal dinner conversations without shouting. The dining room also has a space-agey element to it in the form of the glass-enclosed massive display kitchen at one end of the room through which servers run food through noiseless sliding glass doors. I also spied a chef’s table inside the kitchen, where foodies can get front-row views of the gastronomic acrobatics going on in the food theater. The service is miraculous at Ideas. Waiters and bussers manage that delicate balance of attentiveness without being overbearing; plates were promptly cleared after each course, cutlery and water refilled without having to ask. 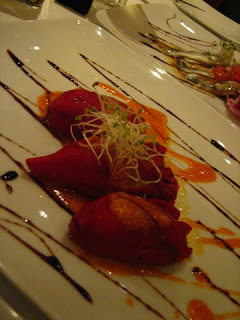 Appetizers of piquillo peppers with creamy cod and cognac sauce (above) were soulful and hearty, the cod just smoky and salty enough to meld with the sweetness of the peppers. A lovely plate of plump boquerones (anchovies) in vinegar(below) brought me back to my first visit to Madrid, the time I fell in love with anchovies. Except these were much more swoon-worthy, nicely tart and zesty, with a bite that was as refreshing as the ocean from which they sprang. 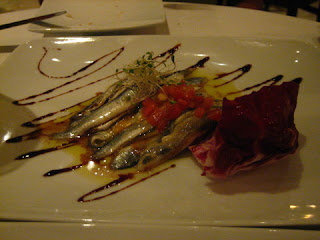 An palate cleanser of honeydew melon soup was a perfectly simple and eye-catching, delivered in a tall shotglass. 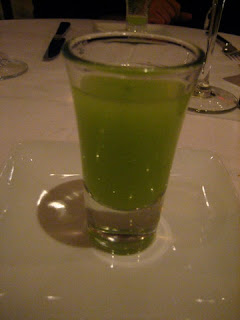 The goat cheese salad with pecans and honey was hearty and satisfying, the cheese moist and fresh, the pecans crisp and warm. 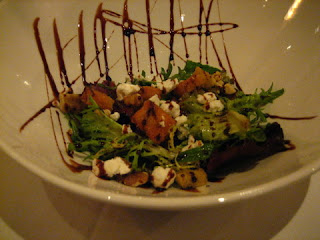 Desserts of crunchy chocolate brownie and blackberry cheesecake were offset with flutes of strawberry juice, a fitting cap to a well-executed meal. 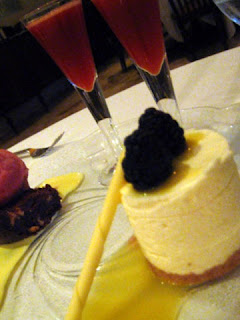 Email ThisBlogThis!Share to TwitterShare to FacebookShare to Pinterest
Labels: Restaurants

This review made me want to spit out my tamari rice cakes that i am eating for lunch. Anchovies aside that sounds like the perfect meal especially the dessert. holy crap sara you eat well!

Can't wait to try it... but I stayed away from the Grove this past weekend on account of the arts festival... too many people!

cJ - I too stayed away from the arts fest, can't deal with weekend traffic anymore. Let me know when you hit Ideas, I'm curious what you think.