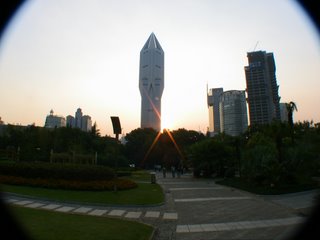 10:30 Breakfast is had by walking through Nanjing Road and patronizing the various bakeries and sweetshops that Shanghai is famous for. Apparently the Shanghaiese have a penchant for sweet things.
11:00 Refill our SIM Card at China Mobile. For some reason, this requires we speak with no less than 4 representatives and relocate to an office next door to process the transaction. Bureaucracy is lifestyle here. 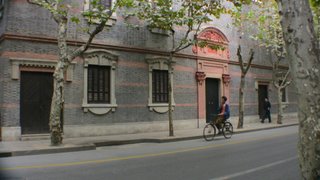 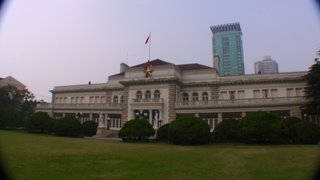 an opulent mansion originally owned by the Khadouri family, Sephardic Jews from Baghdad. Now it is repurposed as a children's facility but it look liked nothing was happening there.
Many old mansions in Shanghai including the Peace Hotel, Victor Sassoon's gothic gem, were owned and built by Shanghai's wealthy Jewish businessmen in the 1930's.
1:00 Taxi (there's a TV screen in the front passenger seat, below) 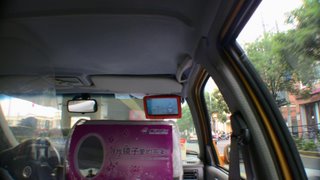 to Xintiandi, an impressive residential and retail restoration project designed by architecture firm Wood + Zapata. Xintiandi proved to the city of Shanghai that their classic colonial structures were worth saving, and that tourists love to wander around alleyways of manufactured nostalgia. 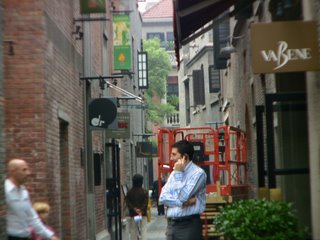 Like Faneuil Hall in Boston, it works and though it lacks the feeling of a neighborhood that developed organically, it's still a fine place to shop and eat.
1:30 Lunch at Simply Thai, not as good as Cow and Bridge Thai in Guangzhou (possibly the best Thai food in China - according to the guidebook and our bellies) but a worthy effort.
2:00 Walk through Shanghai's antique market, lots of knick knacks and an old Menorah, possibly a remnant of the Shanghai ghetto? 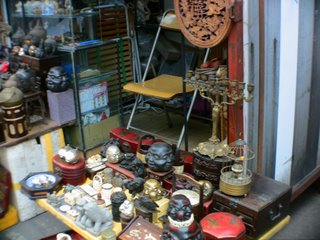 3:00 Everyone says you gotta a massage in China, so we opt for the trendy, Western-friendly Dragonfly. At 120 RMB ($15) for an hour (that's right an hour) of shiatsu massage, Dragonfly is a bargain. Plus, you get to wear regal black pajamas during the treatment.
4:30 Walk from Fuxing Park back to Nanjing Road - pick up some bootleg DVD's on the way: Nacho Libre, Da Vinci Code, Lost Season One. Each is 5 RMB (60 cents) and great quality. Is there anything they can't copy in China?
5:30 Shop at Muji, a Japanese department store on Nanjing Road. Minimalist, logo-free and selling both clothing and housewares, it's like a Japanese Ikea.
6:30 Gather our bags and head to the train station for the Z6 to Beijing.
7:15 All aboard! We have stocked up on plenty of provisions for the 12-hour journey including lots of beer, just in case we make friends. Turns out, the soft sleeper is really comfortable with 4 bunk beds complete with fluffy down comforter and plush pillows. A little table with a flower bud for decoration serves as a place to read and look out the window. Walking through the train is an exercise in keeping your balance while also being a looky-loo; each car is a little world of activity. People are watching movies on their laptops, charging their phones in the hallways, and padding around in the train-issued disposable slippers.
The dining car is quaint and full of chatty travelers. At one table a Chinese and Russian man converse animatedly in Russian. Another table seats a family of four, contently eating their dinner of marinated peanuts and rice. Our fellow sleeper car roommates are a Chinese man and woman who are both traveling alone and very shy about speaking English. That's ok, because after drinking 2 beers I am ridiculously tired. At about 9:45 we each take our bunks and curl up for the coziest night's sleep thus far. The slow rumble of the train lulls us through the night. When we wake it is Beijing.