Shanghai Day 1: You Had Me at the Bund 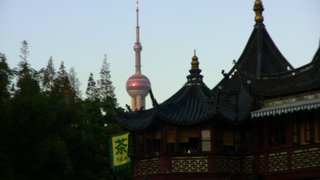 It may be a hackneyed phrase, but Shanghai is the Paris of China. If the Maglev train that whisks visitors from the Pudong airport to the city center represents anything about this city, it is the incredible speed and elegance with which Shanghai is hurtling into the future. Though our time there was too short, we were able to scratch the surface of this cosmopolitan metropolis, a beacon of development and urban planning in an otherwise traffic-choked country. From the historical restoration project/shopping mecca called Xintiandi, to the neoclassical monoliths on the Bund that now host global restaurants, to the "six-star" hotels in Pudong, Shanghai is one of the most fascinating and romantic cities in China.
Obligatory Rundown:
10:30 Arrival
11:15 Lunch at Godly Vegetarian Restaurant ( 445 Nanjing Xi Lu; West of People's Square and close to the Art Museum) for a sumptuous fake-meat feast. Highly recommended for its soothing temple decor, incredibly low prices and high quality vegetarian food. The smoked duck, crab salad, and stir-fried beef were faux-tastic. Judging by the crowded ladies lunching that day, it's a popular spot in the city.
2:00 Walk through the French Concession, a neighborhood filled with charming brick row houses and colonial era mansions.
4:00 Make it to Shanghai's Old City where alleyways are filled with Asian tourists and cute souvenir shops. Of course, there is the mandatory Starbucks, this time nestled in ye olde pagoda (below). 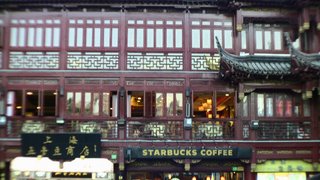 We attempt to enter the tea house in YuYuan Garden, where Bill Clinton has enjoyed tea but alas, the gardens are closed for the day.
5:00 Ferry (25 cents) to Pudong, a section of Shanghai that is home to the Jin Mao Tower, the tallest building in China at 88 floors and will soon be home to the World Financial Center surpassing Jin Mao at 101 floors. To answer your question, yes, the world really does need these tall buildings. Pictured below is the Jin Mao with the construction of the WFC in the foreground. 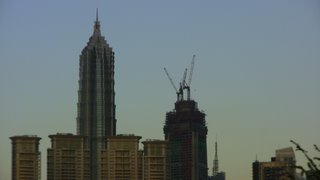 Oh, and the WFC will only be the tallest building in the world until it is surpassed by the gigantour Burj Tower in Dubai which will rise to the heavens at 160 floors. It's like Dubai and Asia are in a race for the most retarded buildings ever.
6:00 Drinks at Cloud 9 located at the Grand Hyatt in the Jin Mao building. The highest bar in the world, this lounge is located at the 87th floor. I actually preferred the view in the hotel's lobby at the 54th floor, but that's just me.
The atrium of the Grand Hyatt spans the 56th-87th floors. Standing at the bottom feels like being in an oversized conch shell. 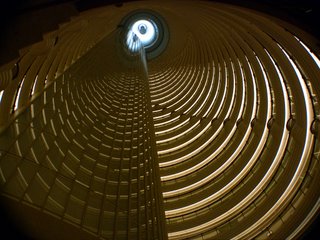 The Grand Hyatt also boasts the highest swimming pool in the world at the 57th floor. We took a few moments to admire a man enjoying a swim in a speedo, and the view. 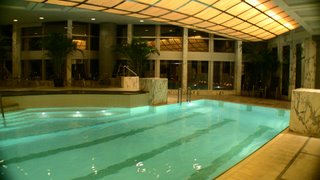 7:30 Satiated with Pudong skyscraper madness we take the metro back to Shanghai and check out the Bund, a picturesque neighborhood on the Huangpo River. The colonial buildings on the Bund have recently undergone massive restorations and become home to many high-end boutiques, resturants (Jean Georges and Jacques and Laurent Pourcel have outposts here) and rooftop bars with magnificent views of Pudong.
8:00 Eighteen on the Bund features Bar Rouge, a new Shanghai gliteratti magnet. The rooftop cabanas offer both views of Pudong and the pretty people who can afford the minimum 1600 RMB ($200) bed fee. 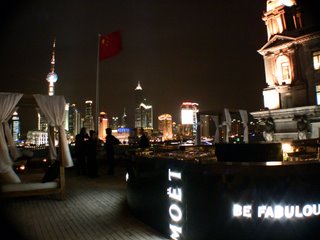 Also at 18 is the Pourcel-run Sens & Bund (French cuisine) which was willing to seat us despite the lack of a reservation, though we declined since we already had dinner plans. A refreshing aspect of all these Western upscale restaurants and hotels is their complete lack of snootiness. They were always willing to give us a table without reservation even we looked quite travel-worn. That rarely happens in cities like New York or Miami.
8:45 Three on the Bund. Redesigned by Michael Graves it hosts the Evian Spa, an Armani store and three reputable restaurants. We peek into Jean Georges (French) which has the best views of the building, Laris (Australian) is warm and stylish and Whampoa Club (Shanghai cuisine) sports playful Asian decor. The food is all very top notch, but it is ultimately the Blade Runner-esque views of Pudong that draw the crowds. 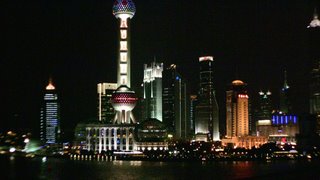