Housing Developments in China - We're not in Kansas Anymore 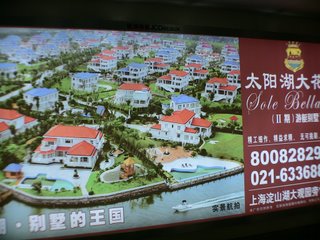 Gated communities are a well known phenomenon of the American landscape. Now China has caught onto the cookie-cutter home development boom as well. China's middle class is growing exponentially and once it fully explodes (probably within the next 20 years) there will be major demand for these meticulously planned communities. This picture was taken at the Guangzhou airport, the epicenter of Chinese foreign manufacturing and trade. Aside from the Chinese characters, this could be a poster for any suburban subdivision in America. It's even on a waterfront (can't tell if that's man made or a natural lake). Whatever the environmental impact will be of developing single-family housing for a population of China's scale, it certainly won't add to China's already strained eco-status.