Beijing Day 1: Check Back After 2008 Olympics 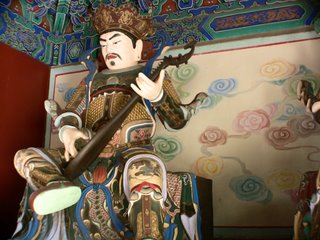 If you happen to visit Beijing in the next year and a half you will observe that the ENTIRE city is under construction. Bamboo scaffolding covers everything from the temples in the Forbidden City to Rem Koolhaas's fascinating CCTV building. Streets are torn up and muddy ditches left in their wake. The city is in a mad dash to get ready for the masses that will descend come Winter 2008. In all fairness, Beijing is already quite built up with sufficient infrastructure and skyscrapers galore but I guess it's par for the course of any city blessed with the Olympics. Memo to Beijing Tourism Bureau: Teach your taxi drivers to read English. Speaking English I know is too big a request, but at least have them recognize English-written locations on a map. The only way we managed to get around the city was by showing the cabbies our destination written in Chinese. Sometimes our city maps had the Chinese characters, and other times we had Chinese friends write things out in Chinese so we could show people where we needed to go. As a result I had a pocket full of paper scraps saying things like "We want to go to the Great Wall," or "Silk Market," etc. Something tells me patrons of the Olympics are not going to fare much better....
7:15 Arrival from the Shanghai train.
7:45 Beijing Subway to Llama Temple. The differences between Shanghai and Beijing are glaring. Beijing seems very staid and conservative, not sleek and new like other Asian cities. At the subway there are no electronic ticket machines or fast-action ticket zapping turnstiles like in Hong Kong or Shanghai. In Beijing everyone waits on line to buy a ticket from the clerk and then people stand by the turnstiles to check tickets. Very old school. Beijing has a lot of work to do before the 2008 Olympics. A lot.
8:30 From Llama temple we head to our host's - friends of a friends and the nicest, sweetest couple in all of China. Their spacious loft-style apartment is warm and inviting (and large even by Western standards).
10:00 Traditional Beijing-style breakfast of fried dough dipped in a foul-smelling fermented bean soup. The veggie gyoza (dumplings) are a lot more palatable. Dessert is bean paste cubes, apparently the cuisine of the Imperial Palace.
12:00 Walk through the hutongs, old one-story neighborhoods with courtyards that have now become trendy areas with cafes, boutiques and bars. There's a definite hippie vibe to Beijing, lots of knitted scarves and Indian batik fabrics on display. The No Name Bar (below) is the oldest in the now trendy neighborhood. 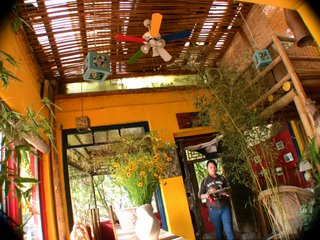 2:00 Walk through Behai Park, a sprawling campus of shrines, temples and a calm placid lake. 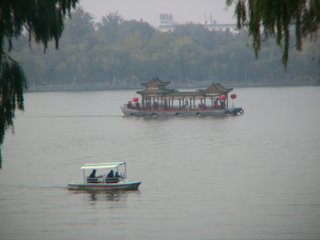 In one of the park's temples is a sculpture of Buddha (below) carved entirely out of white Jade. 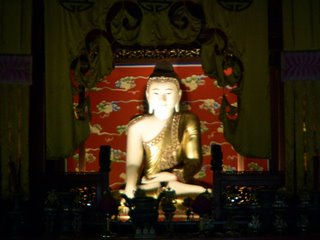 There's also a puzzling photoshoot taking place. Or maybe it was a photography class. The "bride and groom" look pretty groovy. 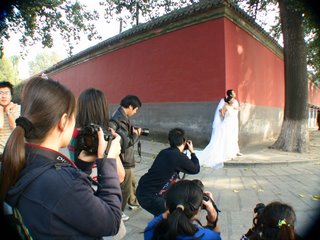 This type of thing occurred throughout our stay in Beijing - we happened upon students photographing things on every corner - in the streets, at tourists sites, all over. Perhaps Beijing schools have great photography programs.
3:30 After the park we swing through the Forbidden City, the massive complex of royal residences, temples and shrines that once held the activity of the Imperial Dynasty. Scorcese shot The Last Emporer here. I hope they broke out the feather dusters for that shoot because most of the Jade sculptures could use a little gussying. 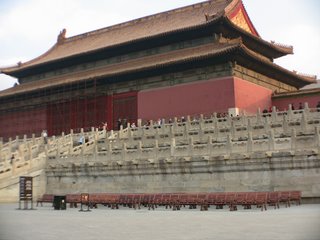 And of course, a majority of the buildings are being renovated. The older, weathered buildings are actually more charming than these new repainted digs. The air of history and centuries transpired comes through stronger with the neglected facades. Would it look so bad for the Olympics if the Forbidden City walls were cracked and fading? 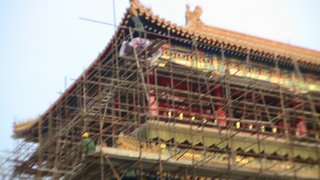