In Praise of Lawson's 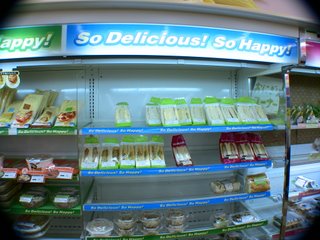 I'm on a Pico Iyer kick, probably because he's so damn good. In this essay he lauds Lawson's (above), a convenience store chain in Japan. These stores are remarkable; incredibly functional with a variety of fresh, strange food and daily use items available all day. One morning there we joined the parade of uniformed schoolboys buying their morning sushi and black bean pop tarts and for a few moments we were part of that quaint Tokyo suburb. Iyer sums it up very well:

The convenience store is a model of Japan in miniature: the triumph of function over fuss and of ease over embarrassment. Just as you can buy whiskey, eggs, pornography and even (it is said) women's underwear in vending machines, so you can all but live in convenience stores. I pay my phone bills and send my packages through the local branch of the national Lawson chain (named after the defunct American Lawson); I buy my bus cards there and tickets for Neil Young concerts. I make the convenience store my de facto office, lingering by the photocopier for hours on end and then faxing an article, say, to New York. Yet the first law of Japan, even in Lawson, is that nothing is what it seems, and that you can find all the cultures of the world here, made Japanese and strange. Here, in the four thin aisles of my local store, are the McVitie's digestives of my youth -- turned into bite-size afterthoughts. Here are Milky Bar chocolates, converted into bullet-size pellets. Here are Mentos in shades of lime and grape, cans of ''Strawberry Milk Tea'' and the Smarties I used to collect as a boy, refashioned as ''Marble Chocolate.'' Were Marcel Proust to come to Lawson, he would find his madeleines daily but made smaller, sweeter and mnemonically new.

It's common to hear that Japan has created a promiscuous anthology of the world's best styles. And the convenience store is the center of this. Tubs of Earl Grey ice cream, sticks of mangosteen chewing gum, green-tea-flavored KitKat bars: they're all here in abundance (though, in fashion-victimized Japan, no sooner have I developed a fondness for KissMint chewing gum ''for Etiquette'' than it has been supplanted by ice creams in the shape of watermelon slices). And even the smallest chocolate bar comes with an English-language inscription that, in the Japanese way, makes no sense whatsoever, yet confers on everything the perfume of an enigmatic fairy tale: ''A lovely and tiny twig,'' says my box of Koeda chocolates, ''is a heroine's treasured chocolate born in the forest.''

In modern Japan, the convenience store is taken to be the spiritual home of the boys in hip-hop shorts and the girls with shocking yellow hair and artificial tans, who try with their every move -- eating in the street, squatting on the sidewalk -- to show that they take their cues from 50 Cent and not Mrs. Suzuki. The door of my local Lawson has badges to denote police surveillance, and where the great 20th-century novelist Junichiro Tanizaki praised shadows (nuance, ambiguity, the lure of the half-seen) as the essence of the Japan he loved, Lawson speaks for a new fluorescent, posthuman -- even anti-Japanese -- future. And yet, in the 12 years I've lived on and off in my mock-California suburb, the one person who has come to embody for me all the care for detail and solicitude I love in Japan is, in fact, the lady at the cash register in Lawson. Small, short-haired and perpetually harried, Hirata-san races to the back of the store to fetch coupons for me that will give me 10 cents off my ''Moisture Dessert.'' She bows to the local gangster who leaves his Bentley running and comes in the store with his high-heeled moll to claim some litchi-flavored strangeness. When occasionally I don't show up for six or seven hours, she sends, through my housemates, a bag of French fries to revive me.