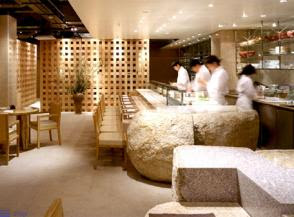 ZUMA, the brainchild of German chef Rainer Becker, offers a sophisticated cuisine philosophy inspired by the informal Japanese dining style called Izakaya. Becker developed the ZUMA concept of authentic, but not traditional Japanese cuisine, after returning to London from six successful years working in Tokyo, learning the intricacies of both Japanese food and culture.

What caught my eye is that the restaurant will be designed by Tokyo based Noriyoshi Muramatsu who used to belong to the design group Super Potato, responsible for some incredible interiors (imagine if Michel Gondry had gone into interior design instead of film). So yes, it's another celeb-chef cookie-cutter outpost (are we in Dubai? Istanbul? Does it matter?), but maybe this designer will make it not so cookie-cutter-like. And I'm thinking that Fall '09 opening date sounds mighty optimistic...