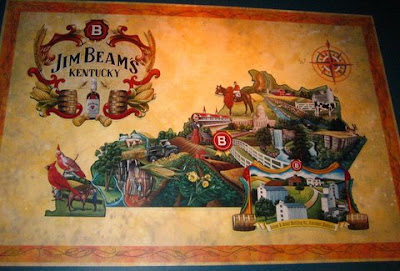 A few more nuggets of Louisville fun before we return to our usual Miami-based programming:
Above is a mural that graces the gift shop/bourbon museum at the Jim Beam distillery. We watched an informative video that detailed the history of the distillery and featured footage of a senile old Southern guy (not THE Jim Beam, but one of his kin) who relayed the fact that "used to be you could get a pint of bourbon for a quater." We also learned that during the distilling process a super-concentrated spirit is produced called "white-dark" and quickly pronounced that the coolest liquor name ever. We were then treated to generous quaffs of Knob Creek and Baker's after which we all enjoyed each other's company much more and felt that Kentucky was just darned awesome. 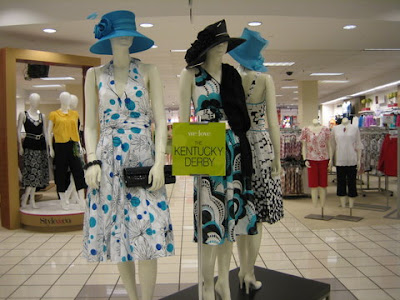 Another observation gleaned from our time there: Louisville is Derby town. Like, it is THE exciting thing town. This makes sense when you realize how fantastic Derby-themed parties can be. Just think about the hats - they are amazing. Even at Macy's we were treated to a mini-fashion show, a slice of Derby cake (deelish) and plastic glasses of champagne which we learned to our chagrin were non-alcoholic (that was 3 glasses too late). 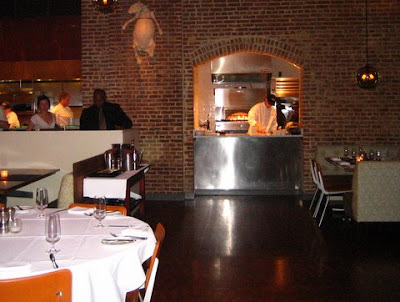 We then went to dinner at Proof on Main, housed in the ultra-hip 21c museum-hotel that features its own impressive contemporary art gallery. This place exhibited the kind of easy urban cool that Miami sometimes lacks. Plenty of young professionals chatting away at the busy bar, lots of good energy. The restaurant had a bustling neo-industrial feel and the food was rustic American, hearty and satisfying. The place was filled with grand Southern debs in gorgeous Derby hats as they had all just come from an event at the Louisville Museum across the street. If you're ever in Louisville, this place is worth checking out.
A quick walk through an empty Churchill Downs and our Kentucky adventure drew to a close. The only disconcerting thing about the city - all the "no firearm" signs at the entrances to public places. 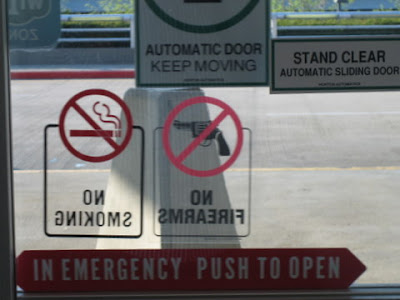 Glad you posted this - I was gonna ask you about Proof on Main because Ive been researching Louisville for what to do on Friday night and that stood out for dinner. After that I think we will likely head to a place called Stevie Ray's Blues Bar for bourbon and blues. Doesnt get much better than that... :)

Any other food recs?

bm - Proof on Main is perfect for Friday night. Didn't see Stevie Ray's but you can't go wrong with bourbon and blues. For breakfast check out Lynn's Paradise Cafe - a quirky place with awesome mac and cheese. http://www.lynnsparadisecafe.com/

BTW - I love the term "derbage". Sounds like something I would say haha.