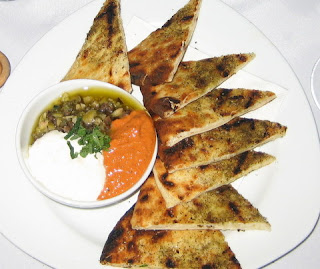 I had been hearing a lot of good things about Creek 28 and was curious to try it. Luckily, so were Miami newbies Brooke and Dan who gamely joined us for dinner. It's located in the Indian Creek Hotel, a graceful boutique hotel in a restored building from the 1930's with wood beam ceilings and terrazzo floors. The restaurant is quite wee indoors, but boasts one of the best courtyards in the city. Nestled amongst palm trees with ample tikki torches providing romantic lighting, the outdoor patio is a must. A bottle of wine, 6 plates and 2 desserts later we all agreed this is definitely the place to go for a fantastic meal on a breezy night. The food is eclectic; a broad swath of the Mediterranean comes into play, though the tropes, scents and seasonings of the Middle East and North Africa remain squarely in the foreground. Chef Kira Volz collaborates on Dinners in Paradise (she's cooking on the April 27th dinner) and used to helm the kitchen at the Abbey hotel. She has a loyal following of food fiends. It's easy to see why.
Let's start with the complimentary bread: it was damn near perfect. Slices of toasted baguette with exquisitely crispy crust served with olive oil. It's been a while since I asked for a second bread basket but when the waitress asked if we wanted another, we all nodded like excited puppies. We started with the chef's signature grilled romaine. Warm and smoky topped with shredded grana cheese and red onions it was a tasty harbinger of the ensuing feast. Another starter of "three dips" came with a cup of muhammara (a Turkish walnut spread), olive tapanade, and a tzatiki-like yogurt dip. All delicious, all devoured along with the zataar-topped toasted pita. We ordered a bottle of Sawbuck Malbec which at $21 was a great value. The wine list in general is super-reasonable and accessible. As are the prices overall. Apps. were $8-$9 and mains were $15-$25. 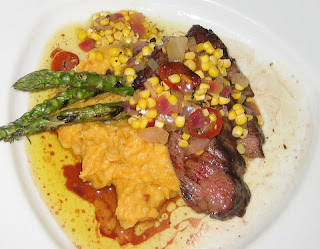 I was looking forward to a dish I had seen online - a fig and chestnut ravioli - but alas, it is a seasonal item and they weren't serving it that night. Our mains included a Hungarian goulash, grilled scallops with currants and chorizo, skirt steak with yuca mash and a lentil stew with coconut. Each dish was so uniquely spiced and composed that we all had our own culinary parties going on. The goulash was chock full of lamb and beef with a hearty tomato base. The lentil curry was fiery and topped with crunchy rice which appealed to my Persian side. The scallops came swimming in a pool of saffron tomato broth lent just the right amount of smoke and sweet by the chorizo and currants. And the skirt steak was declared on par with Beast's (lest you think it's a bovine nickname, it is actually our tablemates' favorite Brooklyn restaurant). 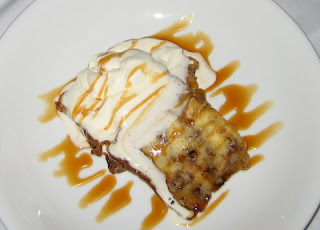 We went for two desserts: the plantain bread pudding and the chocolate brownie cake with homemade malt ice cream. The bread pudding was the standout with thick tasty slices of banana-packed goodness. The brownie was kind of underwhelming given the caliber of the rest of the meal (and at $9 a bit too pricey) but the ice cream was redeeming. We intended to order a bottle of Kent Rasmussen Gewurztraminer for dessert but all they had left was half a bottle so they offered us each a shot glass of the wine on the house. We loved that. All in all a lovely meal in a lovely spot, a true Miami gem.

i LOVE Creek 28. Too bad about the Ravioli...its my favorite dish of anywhere in Miami. Hopefully they'll have it next time :)