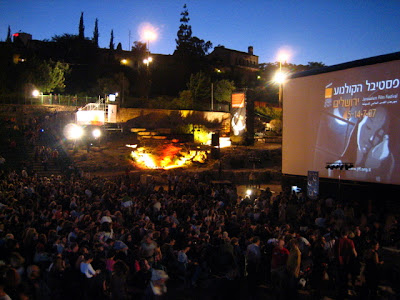 The Jerusalem International Film Festival kicked off last week with an outdoor screening of Ratatouille next to the Old City. The movie is a nice expression of the passion of a foodie (albeit a rat foodie) and though the film was outdoors on a chilly Jerusalem night, I fell asleep courtesy of the cozy fleece blankets provided by the festival's sponsor, Orange cellphone service.
We've caught some great films throughout the week including Persepolis, the animated version of the graphic novel about a young girl's experience growing up in Iran in the 80's and Wristcutters: A Love Story, the adaptation of Etgar Keret's novella Kneller's Happy Campers featuring a wonky Tom Waits and a pleasant cameo by Will Arnett of Arrested Development genius.