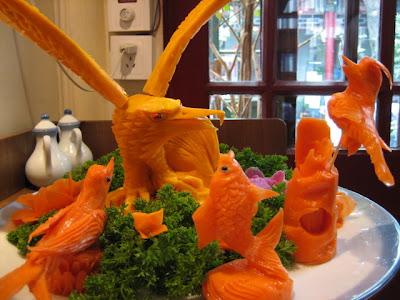 Film making is non-stop problem solving. There is constantly an issue to attend to, whether it be logistical (umm, have we confirmed our locations tomorrow?), conceptual (should that actor be looking quite so tired right now?) or practical (where's a good place to get lunch for 7 people, and cheaply, please?). In order to emerge relatively sane from the whirlwind of maddening details one must roll with the punches. Be open to change. Be willing to compromise. Resist the urge to run in the opposite direction. 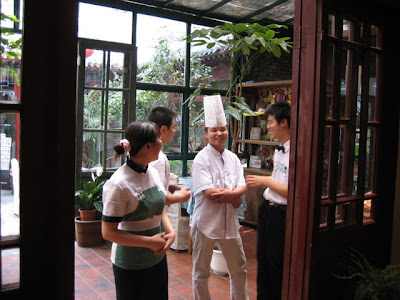 On Day 11 of filming we embarked on another restaurant shoot. This time it was in a restaurant that is actually open for business and would be open during the lunch hours when we would be filming. It was not ideal but it was the best we could get. The place is a charming Buddhist vegetarian spot in a Hutong. It has tinkling fountains, lots of plants and ancient Chinese decor. Plus, they were letting us film there for free, provided we bought food for cast and crew which was infinitely cool of them. When we had scouted the spot days before we decided on the airy outdoor courtyard for the business lunch scene, it had the most detail and lighting in the middle of the day would be less of a challenge. But when we arrived at the location on the day of the shoot they informed us that, sorry, can't let you film in the courtyard, it will disturb customers, maybe the backroom will be more to your liking. Well of course, no problem. Why? Because as Team Foreign Devils we forge ahead, we get the job done, we don't make details too precious. The room we used in the end looked great; very red and Chinese, very typical for a lunch with Chinese business partners. We managed to get extras by driving up to the Beijing Film Studios in the north of the city (where Kill Bill was filmed) where tons of actors just hang out waiting to get picked up for work. Kind of like migrant farm workers, except these dudes can play anything from a street beggar to a businessman. There are literally actors of all shapes and sizes there, had we gone there sooner, we could have cast the whole movie from the crop on the sidewalk. We agreed on their price for the day - 40 RMB, roughly $5, plus lunch - and transported them to the restaurant. After a quick jaunt to the Silk Market (really, the counterfeit market) I emerged with Paul Smith shirts and Armani ties, instant wardrobe for a total of $20. 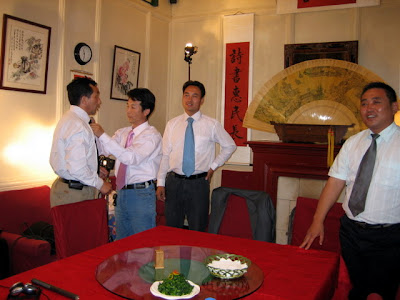 The shoot went well, the actor playing the business boss is Chris Verill, the director of the Beijing Actor's Playhouse and very funny. He was game for our next scene with him, dressing him up in touristy-emperor garb for a phone call. 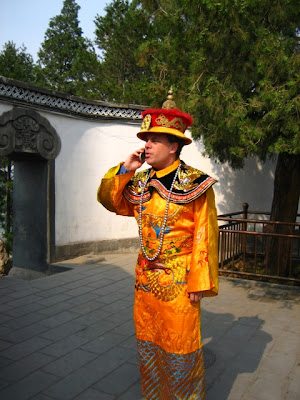