Rocco vs. The Crazy Crowd 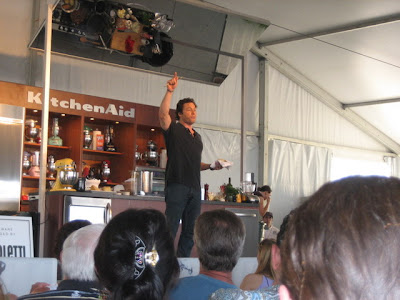 What a difference a few years makes. Last time we caught Rocco Dispirito at a cooking demo at the festival he was unsure how to handle the drunken chef groupies that slapped his ass and cat-called him from the audience. While we appreciated the aw-shucks routine back then, we found this new Rocco supremely entertaining. All swagger and sass, Rocco began his Sunday cooking lesson on how to make gnocchi by rousing the audience with an "Are you guys drunk enough?" He then singled out a voluptuous audience member and continued to make reference to her ample decolletage as the hour progressed.
"You know I'll sign anything, books, boobs, whatever. Just make sure you brought a big enough sharpie!"
And on it went.
His shtick was so refined we wondered if he any Tony Bourdain practice bits on each other back in the green room (though Tony was MIA this year, too bad).
At one point he heckled a woman who got up to leave forcing her to get on the mike and explain why she was walking out.
"I'm not drunk enough for this," she said.
"That's a completely legitimate reason," he conceded. "You may go."
Good thing the rest of the audience was plenty soused and oozing estrogen-fueled howling. If you could get past all the sloppiness you'd realize that Rocco is actually a pretty good teacher, mixing useful info with the banter. And his newfound charisma was refreshing.
Step aside, Bobby Flay.