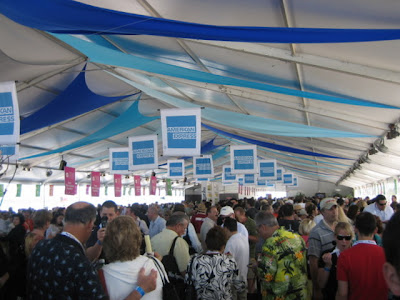 It was rilly, rilly crowded.
My heart sank as I walked up to the tents at about 1:15 (fifteen minutes after opening) and saw the line for the entrance snaking all the way from the sand dune to Ocean Drive and nearly stretching from 13th to 14th street. When we finally got inside things were a bit more spread out but there was plenty of jostling and involuntary bumping and grinding.
Lot's of Tommy Bahama shirts, too.
As it was trade day the ratio of wine and spirits tables to food tables was about 12:1. This effectively meant that the crowd was sloshed within 3 minutes of entering the tents. The food offerings were snack-like and provided by big corporate sponsors (Sysco, Barilla, Sargento, etc.) and smaller brands hoping to get some exposure. Biscotti seemed to be the culinary trend of the year with 4 booths offering the crispy treats. There was lots of cheese, both literally and figuratively on display, and long lines at the tables where actual food was being offered prompting folks to weigh the likelihood of being trampled while waiting for that one slice of filet mignon from the beef purveyor. Umm, pretty darn likely.
And what's up with no wine glass necklaces this year?