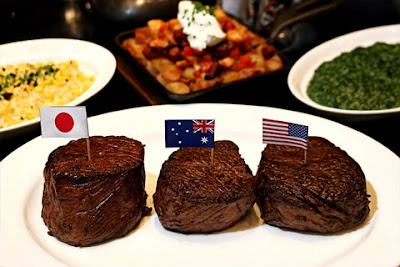 Was privy to a preview of restaurant guru Jeffrey Chodorow's new Kobe Club Miami last night. The restaurant officially opens today but they were in full swing last night. The posh eatery is half the size of New York location (52 seats as opposed to 110) so it's a bit more intimate and has more of a private club feel to it. They've also recreated the noir bordello decor with 2,000 Samurai swords dangling above black banquettes and a swanky bar outfitted in stingray leather. The vibe is seductively dark and sexy and there are a few secluded booths where you can dine clandestinely behind strappy leather curtains.

The menu is basically the same as the New York outpost though they may start incorporating some local seafood into the mix. Not all menu items were available last night but our table sampled the "Samurai Flight" of three types of wagyu-Japanese, Australian and American. The consensus at the table was the meat was expertly cooked, and the Japanese won out from its less marbleized peers. The restaurant has gotten flak for using the kitschy flags to differentiate the meats but it's actually quite helpful if you're in the mood for doing taste comparisons (and why not have a little kitsch here and there?). We also tried the Dover Sole meuniere and the Atlantic Salmon which comes with delectable little lobster dumplings. Both fish dishes were tasty which is good news for non-carnivorous diners.

Appetizers include the usual steakhouse fare with a few creative selections that stand out. We tried the iced hamachi which was refreshing and lightly seasoned with lemon, sea salt and topped with diced pineapples and scallions. The iceberg wedge was a hefty portion doused with blue cheese dressing and the tomato and red onion salad was straightforward tomatoes and red onions, sliced, elevated by a 50 year-old balsamico. Sides were gluttonously good - we tried the creamed spinach, the parmesan truffle fries which come in a basket big enough for four, sake white truffle creamed corn which was quite delicate and the hash brown topped with lobster and chorizo which comes in a rustic square cast iron pan. The menu is extensive so it takes a while to figure out exactly how to plot your beef feast but that's part of the experience. Even the dessert list comes with an impressive and highly detailed selection of digestifs including rare and aged whiskeys.

If you're not up for spending big you can also get a respectable steak for under $40 which is comparable in price to a lot of restaurants in Miami that have less to offer in terms of atmosphere and design. Service was professional, cordial and well-orchestrated which, for a restaurant that is new (and in South Beach) is a testament to fine management. Chodorow's restaurants are well-staffed and well-funded so you always feel like you are in good hands. I can only speak for his properties in Miami but I haven't had a bad meal at Blue Door or Tuscan Steak and that's been echoed by most people I know. He smartly kept this Kobe Club small and it hits just the right notes of being sceney but also appealing to an epicurean crowd.