It probably goes without saying that Asia de Cuba will be one of the hotter restaurants in Miami this season, regardless of the food. Friday nights the Mondrian is packed, and plenty of scenesters will want to preen from the white-on-white dining tables much the way they did when Social at the Sagamore first opened and everyone went nuts for the Kobe sliders. But thankfully, for those who care more about what's on the plate than who's sashaying through the lobby, there's plenty of good eats at ADC. It'll cost you (what did you expect? Marcel Wanders doesn't come cheap), but you probably already assumed that. 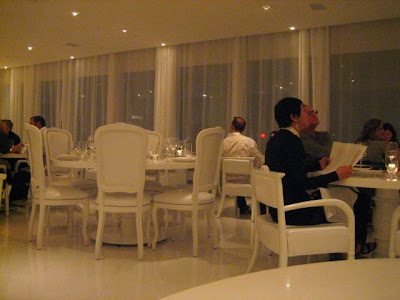 So here's a rundown of some notable fusion-y dishes. The menu is very similar to the ADC in New York which you can peruse here. The restaurant presents itself as a marriage of Latin and Asian flavors which sometimes come together in one dish quite nicely like the Tunapica with olives, black currants and almonds and a soy-lime dressing. 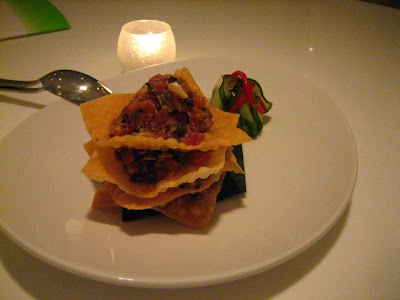 The "noodle box" appetizer seemed to go full-on Asia and forgot about Cuba but that was fine since it was tasty though a bit hard to share. It was composed of wok-fried vegetables encased in rice noodles wrappers and doused in a spicy hoisin sauce. I was impressed that the folks at ADC were not afraid of spice and infused the Asian side of things with adequate fiery flavors. 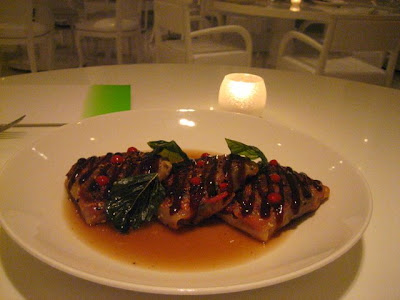 The grilled strip steak was a nice portion accompanied by logs of gingered chick pea fries (good but heavy) and a palate-refreshing melon slaw dressed with citrus and ginger. Also in the background the plantain fried rice (pleasantly smokey), topped with an avocado salad. 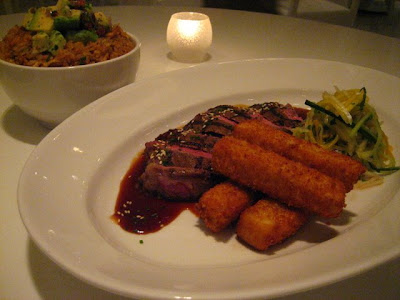 The miso-cured black cod was definitely big enough to share (and at $38 one of the lower-end entrees) and came with an edamame and black bean salad that played off nicely with the flaky fish. 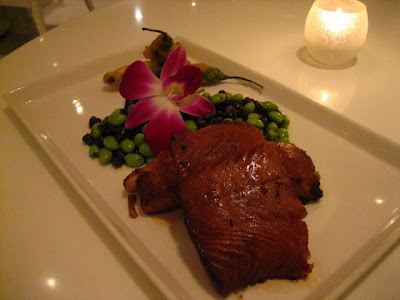 Oh, and dessert? Let's just say you get value for your money. All the desserts are about $14 but you get a slice of cake that could easily satisfy 4 sugar fiends and then a few diabetics lingering around the table jonesing for a spoon of rich coconut frosting goodness. 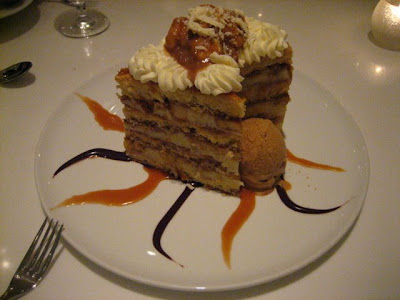