Taste of the Nation, Miami 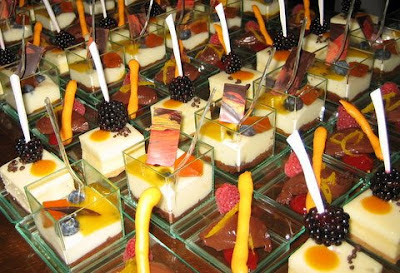 Oh Taste of the Nation, how my belly loves thee! This is one of the better food events in Miami. It gives food geeks a chance to meet local culinary talent while simultaneously eating and drinking to gustatory oblivion. Usually the chefs have their A-game on for the fundraiser, with each restaurant eager to impress the crowd and see which booth garners the longest lines and most attention. Celebrity chefs were in the house: a cherubic Allen Susser was a genial host, Cindy Hutson rocked her bandanna and Michael Schwartz held court at his predictably popular table. At these events you also get a lot of duplicate dishes going on and this year the theme of the night was beef. Lots of rare, raw, seared, braised, grilled red meat. Whereas last year's was all about the tuna - seared tuna, tuna tartar, tuna ceviche, tuna sashimi (by the end of the night you were pumped so full of mercury you set off the metal detectors) this year it was all about the Kobe. 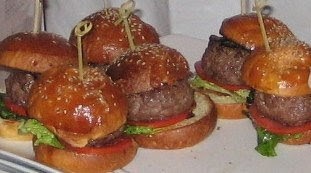 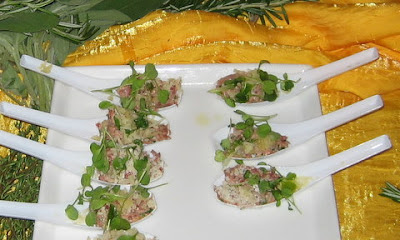 Touch chef Sean Brasel was hyping his new Lincoln Road venture Meat Market with marinated kobe skirt steak with aji panca chimmichurri. The spot is set to open in the Fall and if this dish is any indication of what we can expect, it will be a sufficiently creative spin on steakhouse fare. It will also be quite popular as food fiends snapped up the slices of perfectly cooked steak. 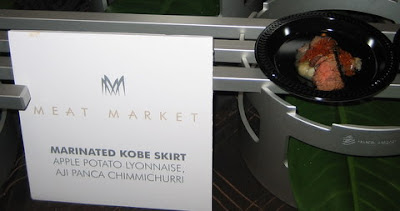 The Oceanaire Seafood Room's massive ice sculpture raw bar was a predictable hit. Who would turn down fresh shucked oysters? 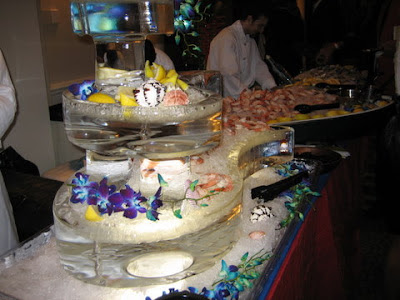 Best in show was the Setai's cured salmon with lemongrass foam and chili-flecked eggplant. A nice melding of textures and flavors and a beautiful piece of silky fish. 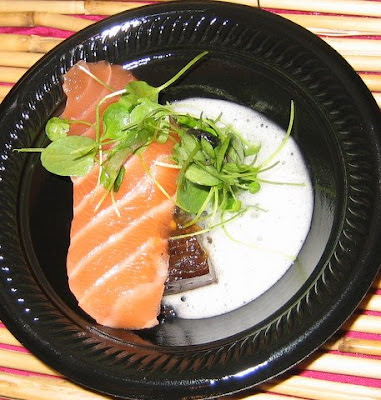 Also quite nice was Blue Door at the Delano's duck and shiitake mushrooms. It was practically the only duck dish of the night and a welcome red meat respite. 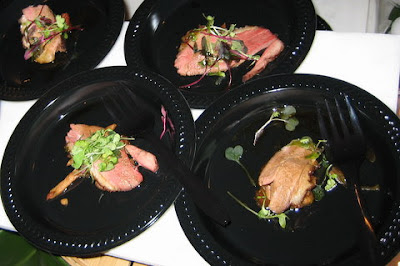 You know, Im pissed that I didnt end up going to this event... Why? Because none of my friends share similar passion for all things culinary and I didnt want to go solo. I shouldve gone. Damn me!

No worries. There'll be plenty more. Plus, it's actually the kind of thing where if you're alone it's ok because everyone's really chatty and social. And I usually end up loosing track of my friends because we wonder off and get distracted at different tables.

Thanks Sara. Please keep me informed when events like this come up, if you dont mind. :)

I loved this event although the funny thing is my favorite dishes were from chefs whose food I alraedy eat! Michael (Genuine) Schwartz (short ribs), and Dewey LoSasso of North One10, lobster peanut butter and jelly sandwich(!) While I also loved the deep-fried pork belly from Bistro One LR (see video at www.TheArtOfHunger.com ), and I agree there was a Kobe-frenzy, I think the other theme this year was truffles. They were everywhere, in truffle oil form, unfortunately. Also got to try the 32-month pata negra ham-worth the price of admission alone.
NB-I got in free...

My wife and I went to Tony Chan's Water Club based on your recent article on "fantastc, authentic Chinese food"; specifically the Peking duck. It was not apleasant experience. First, after carved the skin, they did not seve us the full duck. Second, I was charged a fifteen percent gratuity. Since I did not pay to much attention to the menu I am not sure if that was stated as prescribed by law, I did nit complain. I normally tip a little more if I am satisfied with the service. I don't think I will go back to that restauran