Event Report: Best of the Best

Yes it was at the AA Arena, not a particularly romantic venue for a tasting odyssey but grand in its own vast-sea-of-orange-seats kind of way. About an hour into the event we decided it was the best basketball game we had ever attended. Highlights include Iron chef Morimoto who shunned chefs whites in favor of a hardcore kimono-style ensemble. Dude is the embodiment of culinary-cool, no doubt about it. 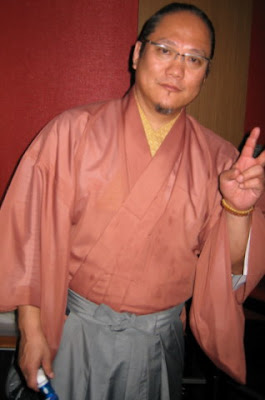 His booth was serving up a fantastic spiced hamachi with parsley puree and microgreens. The way it works is that a chef and a vineyard or two are paired off and occupy a skybox and visitors roam through the circular venue popping in and out to sip, taste and shmooze. I had heard mixed reviews of last year's event - that it was crowded, chefs ran out of food, etc. This year it seemed either they sold less tickets or organizers were better prepared because there was barely any crowding, there was plenty of room to get into the shmancy lounge-like boxes, have a seat at one of the high-top tables, eat your food and even chat with the chefs and wine reps. 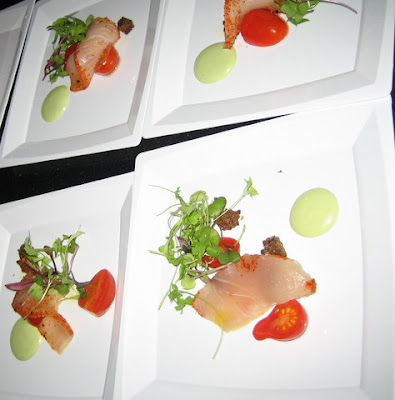 Carnivores were well-rewarded as plenty of steakhouses like Bourbon Steak, Allen Brothers, Kobe Club, Porterhouse New York represented and anyone else who could serve beef did so. 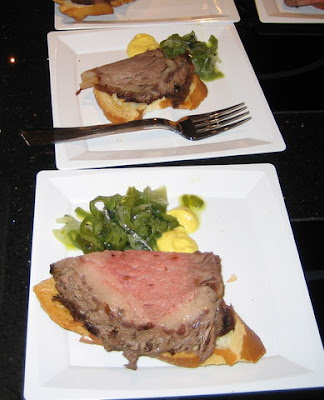 Local chefs were also in the house with Clay Conley (assisted by Michael Jacobs formerly of Grass) serving up a fantastic lamb pide and Dewey LoSasso was carving up massive short rib sandwiches. Lamb was ubiquitous with plenty of shanks on display. Best lamb was courtesy of Suvir Saran from NYC's Devi as it was a generous slice doused with a fantastic minty yogurt dressing and came with a side of curried potatoes. David Pasternak from NYC's Esca gave good fish with marinated grouper in olive oil, refreshing after so much carnivorous bounty. The Fontainebleau set up a mini-club in the arena corridor with flashing disco lights and a DJ. It brought me back to my bat mitvah days and we grabbed a few plates of tomato caprese salad and quickly bolted. 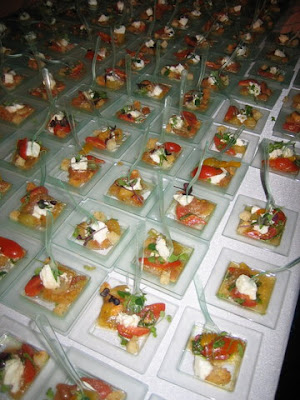 If this is what we can look forward to from the new Fontainebleau, I miss the old Tropicala. If you wanted to drink $300 worth you certainly could with pricey bottles on hand from Tor Kenward Wines (like the 2005 cab which is $125 a bottle) or a quaff of Rob Sweeney's Vine Cliff 2004 cab ($150) of which he says only 800 bottles are made and only sells in three locations: South Florida, Tokyo and his vineyard. There were also tasty sips from Chiarello Vineyards like the petite syrah, made from organic grapes, though not technically an organic wine. And a fantastic "Vieux-Os" old vine zinfandel from Schrader Cellars Train Wreck Vineyards, a $30 bottle that stood up well against the pricier selection available.
After noshing and imbibing so much decadence we were ready for dessert and that came in the form of a nearly flawless plate of panna cotta topped with pistachios, blood orange sorbet and wedges of blood oranges from The North Fork Table and Inn, one of those picturesque inns in upstate New York where all you want to do is drink wine and eat spoonfuls of blood orange sorbet. 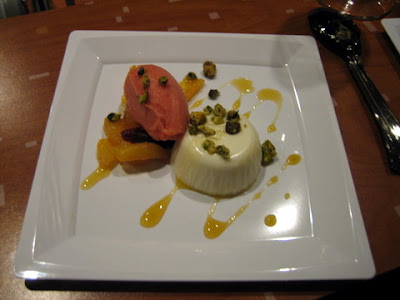