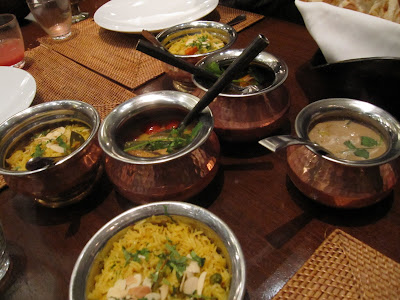 Lately I've been spending lots of time at The Setai. As far as hangouts go, it's pretty nice. One week I stopped in to drink lots of champagne and listen to jazz in their temple-like courtyard. Last Wednesday I was there to feast on delicacies from the Far East. 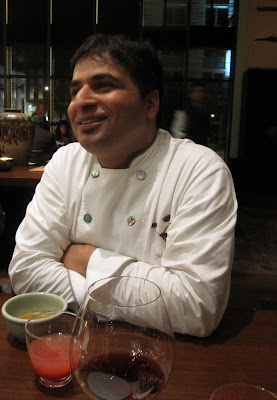 Saran isn't a huge fan of Florida but he's a huge fan of Setai chef Jonathan Wright (and Lee Schrager who has invited him to participate in past Sobe Wine and Food Fests). And he was a gracious host, making the rounds from table to table, taking time to chat with diners (a potpourri of old friends and chef groupies). Little did I realize that before the night would be over I'd fall into both camps.
He's a charming guy, sporting chef's whites and plaid Paul Smith pants. "The cuffs are too narrow - like Indian pants." I found him inspiring, too. He's doing what he loves - writing and lecturing about the food of his childhood. The food he finds endlessly fascinating. The intersection of history, culture and appetites that forms the backbone of culinary traditions.
He sipped watermelon juice spiked with ginger. We talked about my Persian background. "India and Persia were once the center of the world. Everything beautiful in life comes from Persia - not just food and carpets. Everything." It made me want to visit Iran.
In this lifetime, inshalla.
As we spoke the table became crowded with little brass pots of stews - grouper swimming in broth of garam masala, curry leaves and tumeric. Pork cooked with garlic, mustard seeds and dried chilis. Fresh-baked Naan bread made four feet away in the Setai's open kitchen. We chatted in between bites of Tandori lamb dipped in pear chutney, mussels steamed in a fragrant mix of tamarind, tomatoes and black peppercorn. Sea bass marinated in coconut, cumin and lime. 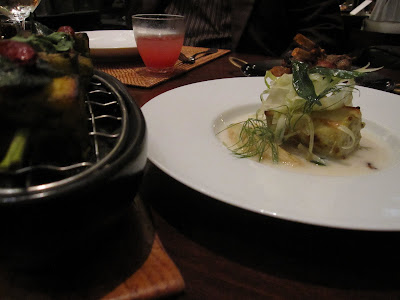 We talked about his farm in upstate New York where he's got chickens, goats, sheep. His hens are lazy "They'll lay an egg every five or six days. Most lay eggs every day." And he sells the eggs to local chefs in the area, in keeping with his farm-to-table philosophy.
He reflected on the origin of curry dishes. "What we Indians refer to as curry is very different from what Americans think of as curry. It's definitely not that vile powder that comes in a jar." And do not get him started on the murky brown gravy that is the abomination known as Japanese curry.
"To Indians curry is a sauce. It can be the tomato sauce you put on noodles. It's not necessarily this spicy, gloppy stuff they serve in most Indian restaurants." The stews on this table were elegant, balanced, fiery. Not cut with clarified butter like most Indian dishes I've tried. I cooled the fire in between bites with scoops of a minty yogurt raita. Saran commented that most Indian households include yogurt with every meal, "and you have a small dish of it by each plate that you dip into throughout the meal so you balance all the PH levels in your stomach. That's why Indians have no need for Pepto Bismol."
By the end of the night I had tasted twelve dishes and each one was a magical carpet ride through the souks of Arabia, the crowded alleyways of Mumbai and the vast waters of Indus River. At the end we tempered everything with pastry chef Noah French's banana ice cream and fritters, fennel and anise seed pancakes and Saran's famous rice pudding cooked with almonds, cardamom and saffron. 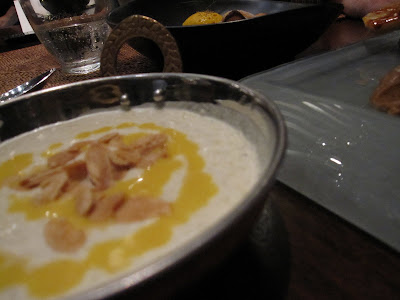 At the end of the night he signed my menu: "May Persia come alive for you with each meal you eat." It wasn't The Setai but a very creative place I visited that night.
The restaurant will be showcasing the Indian menu every Wednesday night. You won't find Suvir Saran there but you will encounter his recipes.

Marina Blue for the Miami Heat

The LeBronification of downtown commences with plans for a massive restaurant and micro-brewery across the street from the AA arena.
No comments: 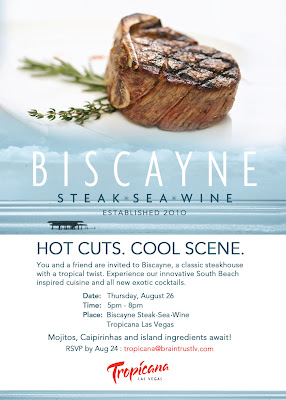 Free Sushi on the Horizon

Zen Sushi Lounge opened near Mary Brickell Village over a week ago. Their grand opening party is this Thursday. More info here.
No comments: 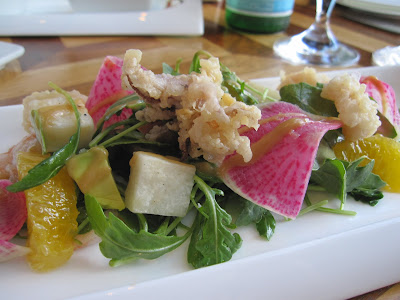 Here's the best looking dish I've eaten recently. Grilled jicama and seafood salad at La Marea. Lightly fried calamari nests on a bed of arugula, chunks of jicama, orange segments and slivers of watermelon radish (not much for flavor but adds gorgeous color). All of it gets doused with a lemon and olive oil dressing. It was almost too pretty to eat. Almost.
2 comments: