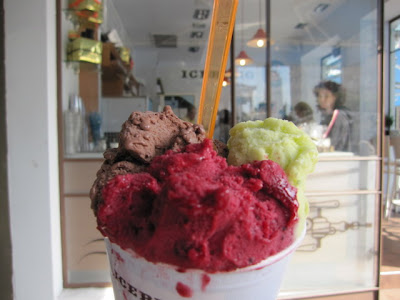 There's a tangy yogurt rennaissance going on in Tel Aviv these days.
Places like Yogo and other Pinkberry copycats are satisfying the hordes on Rothschild and Allenby. So it takes a creative ice cream place to have a line out the door on a warm December afternoon and Iceberg was it. We were impressed with the interesting flavor combinations - wild berries with taragon, mandarin orange with basil and a silky chocolate. The fruity flavors had a sorbet-like texture while the chocolate was straight up gelato-like. Next time I'm going for the espresso cardamom.
At 31 Rothschild Blvd, 03-566-1588.
No comments: 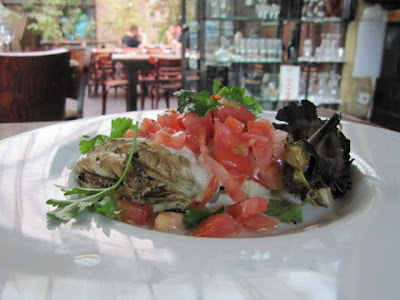 Christmas in Israel has its own spooky, ancient charm. You really feel the Jesus. Way more than you ever could standing in the front of the tree at Rockerfeller Center. Last year we were in Jerusalem around this time and while the Christian vibe is a lot stronger in the holiest city, Tel Aviv was still sporting some Christmas cheer all its own.

We spent the day walking around Old Jaffa, watched pilgrims make their way to the Anglican Church and bought a gorgeous cutting board made from repurposed wood from a young artist whose shop was ridiculously charming (will post on that soon). At around two in the afternoon we got hungry and opted for the Business Lunch at Nana Bar, a meticulously scuffed romantic spot in Neve Tzedek. The food was lovely and typical - an appetizer of eggplant "baladi" whereby a small eggplant is roasted, it's insides cooked to a smoky, creamy consistency, then topped with home made techina and tangy tomatoes. A main course of lightly fried chicken shnitzel. A half pint of beer. All for about $12. This is why I am obsessed with business lunch deals in Israel. More to come...
2 comments: 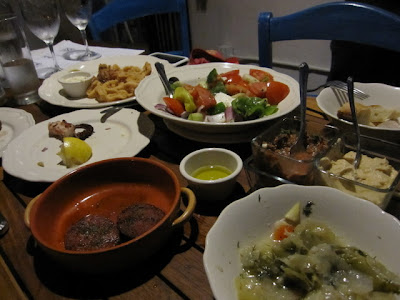 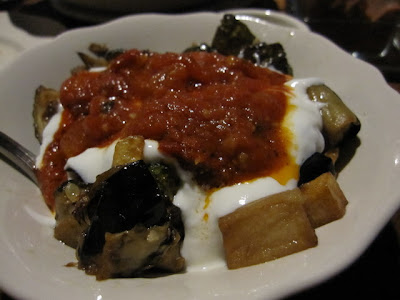 As part of some sort of Spanish olive oil marketing bonanza ten restaurants in the city are collaborating on prix-fixe menus showcasing the liquid gold. If you’re in the Gables hit Por Fin with dishes like white gazpacho and shrimp confit while over on the beach Meat Market’s representing with beef cheeks slow-cooked in olive oil and bittersweet chocolate and olive oil caviar for dessert.
The 4 or 5 course menus are $35-$45, now until December 19, various locations throughout the city.
No comments: 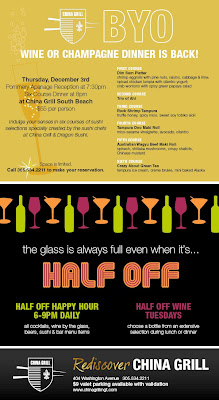 Finally, a happy hour late enough to coincide with dinner time, perfect for working your way through the restaurant’s sushi list, which is half-off along with cocktails, wine and beer. Meaning you can chase that $4.50 Kirin Ichiban with a $6.50 Havana roll (yellowtail, rum, coconut and avocado) for less than the regular price of a saketini at the bar.
6pm-9pm daily,China Grill, 404 Washington Ave, 305-534-2211.
No comments: 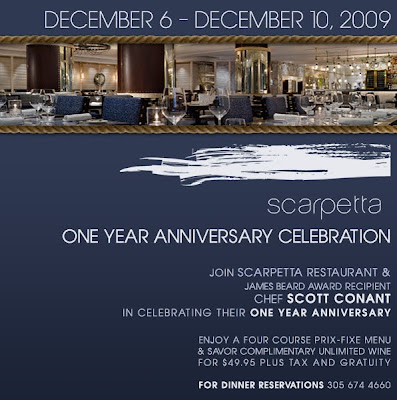 Ever since Scarpetta opened a year ago it’s been my go-to for elegant carb-loading (yes, certain occasions call for elegant carb-loading). So when I got this notice about their special 1-year anniversary menu - 4 course for $50, plus complimentary wine - I was super excited. We said goodbye to Basel Sunday night with this amazing deal.
The menu is here. As you can see it's got all of Chef Scott Conant’s big hitters - the legendary homemade spaghetti pomodoro, the ridiculously smooth creamy polenta and mushrooms and the Amedei chocolate cake. First things first: be prepared for lots of food. Four courses is a lot, and they're not skimping on the portions here. With the exception of the spaghetti, which was a half bowl-size, everything else was full on - the polenta with it's separate little pot of mushroom fricasse brimming with oyster, portobello and morrel 'shrooms in a beefy gravy and the fish, which on Sunday was the branzino in a lobster sauce with potato gnochhi. Even the short rib appetizer was a hefty size with a side of farro risotto. Beasts that we are, we finished every last drop, pulling a scarpetta at Scarpetta, meaning, sopping up the sauces with the heel of the delicious ciabatta bread. All the while we kept saying through full mouths, "this is the best deal ever!" And it truly is. Better than Miami Spice, which the restaurant also represented quite admirably.
Oh, and the wines were free-flowing.
They give one option in red or white. That night it was the 2007 Planeta La Segreta Rosso and a Bottega Vinaia Pinot Grigio both of which went well with the strong tomato, mushroom and seafood flavors on the menu. The free wine is nice, but took a backseat to the amazing food. And after that first spoon of polenta I was already drunk on life. 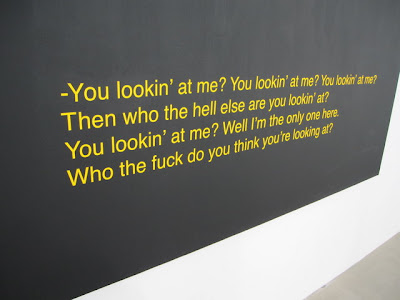 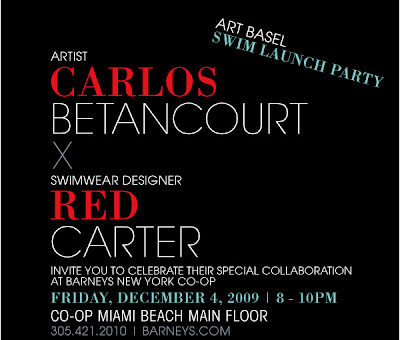 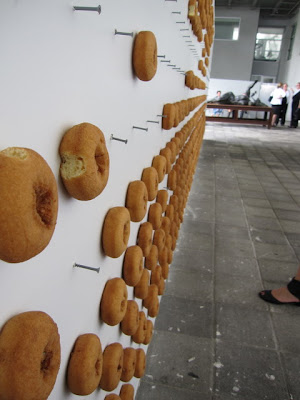 Breakfast at the Rubell Family Collection this morning - a wall of donuts. Some coffee, too. Over at the Rosa de la Cruz collection you could get fresh-brewed cappuccinos and butter cookies. The art was better there too. Rosa's a generous hostess.
No comments: 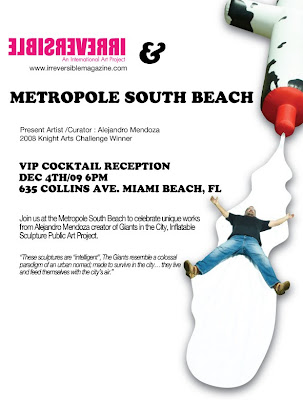 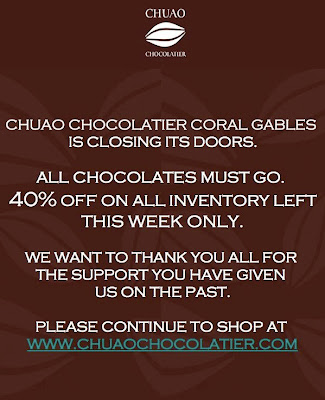 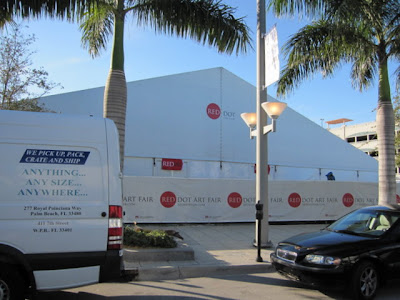 The tents are up in Midtown with Red Dot and Art Miami facing off across from each other on NE 1st Ave and Design Miami's ziggurat is in full effect. 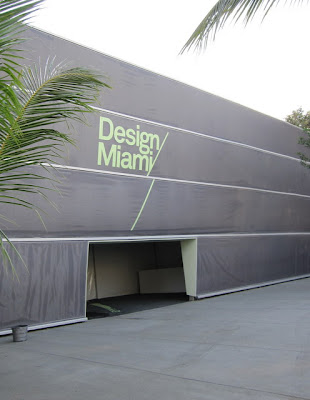 The Design District is now home to a new Christian Louboutin store, complete with a fancy orchid installation out front. Wonder why the French designer chose to go to the DD instead of Bal Harbour Shops. The nabe doesn't seem to be working as a high-end fashion destination (we're looking at you Marni and Y3 and your tragic lack of customers). Ah well. What do I know? Perhaps people hanging in the DD are interested in buying $600 stilettos. 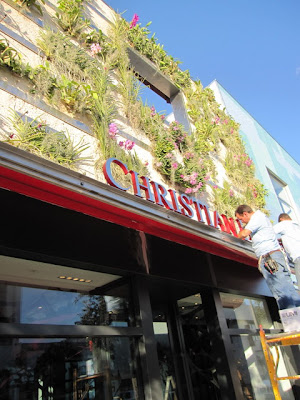 In one of the more intriguing art world collaborations occurring at this year’s fest, musical wizard Danger Mouse and cult filmmaker David Lynch team up for a mixed-media exhibit dubbed Dark Night of the Soul. Expect photographs by Lynch and a soundtrack featuring the Flaming Lips, Julian Casablancas of The Strokes and Iggy Pop, who you’ll probably bump into at this opening.
7pm, December 2, 3100 NW 7 Ave, 305-633-9345.
No comments: