The MiMo District’s beloved hipster mini-golf course and outdoor screening room will be closing up shop come February 29. But until then you still have time for a few rounds of golf and some al fresco beers. Swing by this party on Friday to reminisce about the good times while sipping free Grolsch.
Jan 30, 6-10pm, Upper Eastside Garden, 7244 Biscayne Blvd, 305-984-3231.
No comments: Links to this post 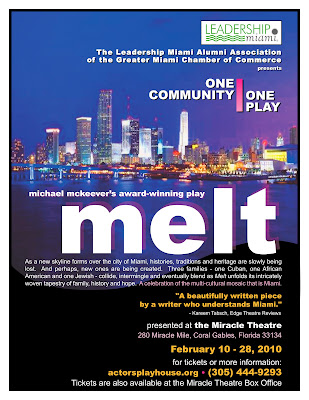 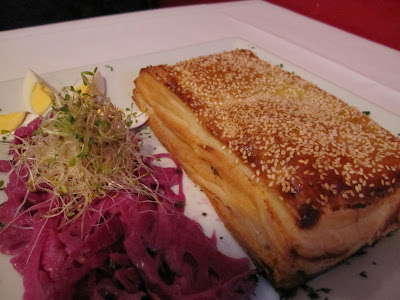 I was never a huge fan of the Israeli spot Bissaleh in Sunny Isles but I'd stop in there whenever I had a hankering for borekas, flaky pastries stuffed with savory fillings like potato and feta cheese. They managed to approximate the sesame-covered snacks that reminded me of the hot, buttery delights I've had in Israel (though they were ten times the price at $8 each). So imagine my delight when I found that the old Bissaleh space -now the H Restaurant, a jazzy French bistro with a roaring wood-burning oven and live Parisian singers on Saturday nights - still offers those Middle Eastern delicacies on the menu, as well as Gallic dishes like escargots in butter and Shrimp and Scallops Provencal. And they serve them the traditional way - with a hard boiled egg and cabbage slaw on the side (though this slaw needed a serious dose of vinegar because it was tasteless). The boreka itself - top notch.
The H Restaurant, 17608 Collins Ave, 305-931-9106
No comments: Links to this post 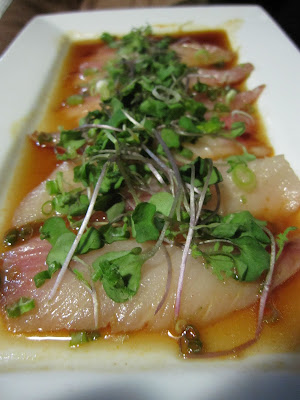 The South Miami sushi loft has revamped their menu of funky rolls (mango, smoked salmon and cashews, anyone?) to include a restrained list of raw fish-inspired tapas. The best of the bunch is the yellowtail bathed in a garlic citrus ponzu sauce topped with organic greens and the salmon carpaccio with wasabi infused oil. Skip the RA "lollipops," the kind of gimmicky dish that probably pleases the UM students that swarm the place. They're all mostly priced around $7 which is a nice touch. 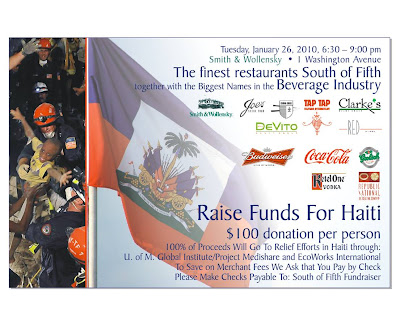 Perhaps you’ve embraced the new-fangled social media tool Twitter and live in a world populated by tweets and hashtags. Or maybe you’re just curious as to what all the fuss is about. Either way you’ll want to make your way to SushiSamba for this party with $5 caipirnhas and mojitos and cheap tapas like $6 lobster taquitos and $4 salt and pepper squid. And, thankfully, no “twitter-tinis.” 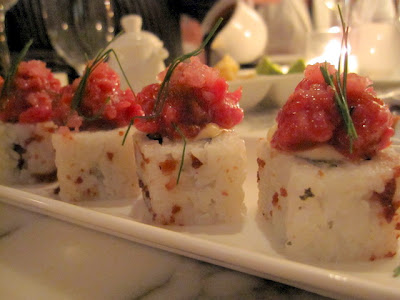 The sleek marble sushi bar in the lobby of the Delano celebrates its tenth anniversary this month with a new lower-priced menu of small plates and rolls available as half or full portions. The best rolls I tasted off this new menu included the Wagyu Tartare Roll (above) made with American wagyu and French pickles over wasabi crunchy rice and the Mexican Roll composed of scallop, shrimp ceviche, avocado, red onion and jalapeño. I also really enjoyed the Kinoko Roll, a vegan option of Japanese mushrooms wrapped in white soy topped with crispy enoki mushrooms and truffle oil. Less exciting was the Smokey Roll (below) made with smoked salmon, smoked tuna, bbq eel and cream cheese because I will never understand nor condone the use of cream cheese in a sushi roll. It's just. Not. Right.
See the menu and prices here.
1685 Collins Ave, 305-672-2000. 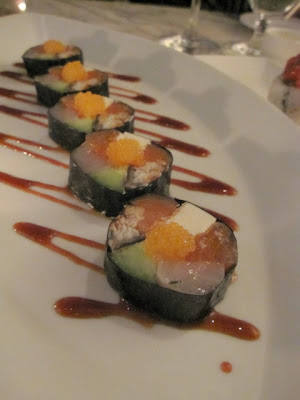 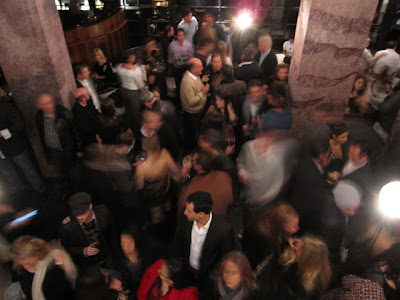 Memo to everyone in Miami: it was great seeing you last night at the STK opening.
The place was packed to the gills which proves one of two things: the opening of a steakhouse is really exciting, or a thousand people had nothing better to do on a Tuesday night than sip free drinks and rub up against strangers.
Last night was quite significant as STK is probably the last steakhouse to open in Miami for a long time. That may just be wishful thinking but it's obvious that this glitzy mega-resto is a holdover from the boom era. It was hard to take in the space as it was teeming with random socialites, reality show stars, hipsters like Alexis Mincolla and stocky body builder David Barton (sporting more jewelry than me, btw) but suffice to say, the two-story space looked sexy and loungey, perfect for tucking into slabs of meat. We didn't get to taste much of the food save for a few skewers of coconut chicken and a cold mini-burger snagged from a silver platter perched on a banquette next to some models wrapped in scarves.
Good thing we pre-partied at the one-year anniversary for Red the Steakhouse where the ample buffet included crab legs, shrimp cocktail, roasted artichokes and smoked salmon.
1 comment: Links to this post

Mushroom Foraging in the Judean Hills 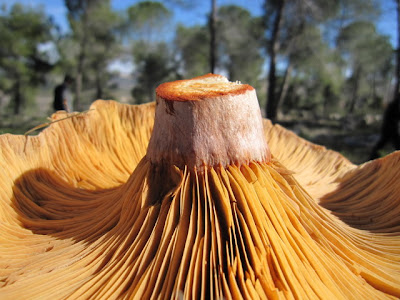 Two days into 2010 and I found myself headed out into the forests surrounding Jerusalem on a cool, crisp morning with a couple of mushroom-obsessed Russians. Our guide was Boris: forest ranger, Sea of Galilee fisherman and a St. Petersburg botanist in his former Soviet life. He moved to Israel 25 years ago and quickly set about getting to know every inch of the country's national park system.

Our mission: to hunt bucketfuls of wild fungi. 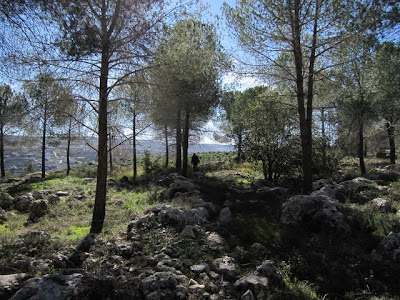 We learned some fun facts about Israel's green canopy that morning. Israel is the only country in the world with more trees today then when it was established 60 years ago. That's because it had practically no trees back in the day (if left alone, the land is essentially a desert). Almost all the greenery has been planted by JNF (some of you out there may even have a few Bar and Bat Mitzvah trees named in your honor!). The soil is rocky and laced with lava (good for grape growing) and the best time to search for mushrooms is after a spell of rain. It never rains in the summer so the winter months are the best time to forage. 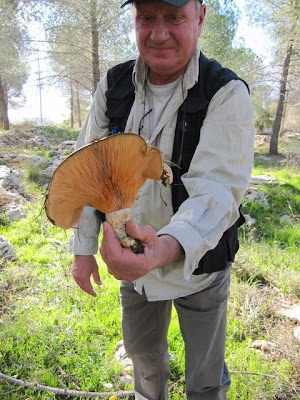 What does mushroom hunting entail? A morning swig of vodka. Kidding! But I think Boris had something special in his canteen. Those wacky Russians. Seriously, mushrooms are tricky little suckers to find since they look almost like rocks - pale, sand-colored, camoflauged.
And the 50-year-old couple who joined us on this excurision were super competitive at this game, popping up from the brush every few minutes with a "found one" and proudly brandishing the rust-colored caps. On this patch of land we found mostly "gingies" named for the Hebrew word for redheads due to their gorgeous orange hue. After about an hour our eyes adjusted to the terrain and we were able to suss out a few thick-stemmed beauties. Our haul for the day was probably around 5 kilos, not too bad for a few amateur hunters. 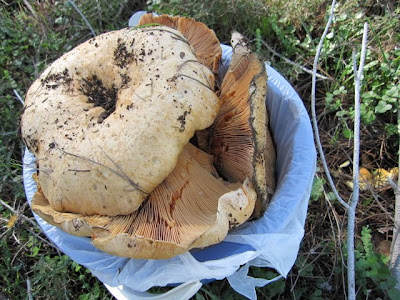