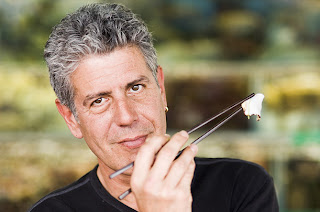 Rabble rouser and epicurean adventurer Anthony Bourdain will be in town hosting a Celebrity Chef event at the Arsht Center Friday night with Eric Ripert and Jacques Pepin. I learned quite a few things from our short conversation, namely fatherhood has tamed the churlish chef, that pig should be a condiment and that he really dislikes Mr. Chow.
Here's a bit of Q & A for you to digest.

Has becoming a father affected the badass side of your personality?
I think any notions of being a badass evaporated immediately upon seeing my gorgous daughter appear on this planet. It’s all a hollow joke, the idea of being cool, immediately upon having a child.

What’s your favorite drink?
I’m a big fan of the negroni. If I’m sitting in Italy, late afternoon, a negroni on the rocks with a hunk of orange in it is a nice way to usher in the evening.

Any locations for your show that are off-limits for safety or security reasons?
We’re trying to shoot in the Democratic Republic of Congo because I’m fascinated by Conrad and the history of colonialism. I’d love to shoot in Iran, where I understand the people are very friendly but the government doesn’t make it very conducive to an American shooting something there.

Because China is going to rule the world.
At least we’ll be eating better.

What’s the best music to cook to?
During the prep period Curtis Mayfield’s soundtrack to Superfly works for me.

If you could only pick three condiments/spices to have for the rest of your life what would they be?
Salt, pepper and a pig.

Pig as a condiment?
It would be in my world.

So…Mr. Chow. I take it you’re not a fan?
Mr. Chow is like the Cipriani of Chinese food. It’s for alleged douchebags who are allegedly not paying enough for their alleged food. It’s for people with small penises. It’s the worst place on earth. When you find yourself at Mr. Chow you need to take a long hard look in the mirror and ask, what has my life come to? Because you have to be in desperate fucking straits to find yourself paying that much money for food you can get better six blocks away.

Mr. Chow---"It’s for people with small penises." Does that include the women, too? In that case, reservation for two, please!

Exactly. "Waiter, I'll have what he/she's having."