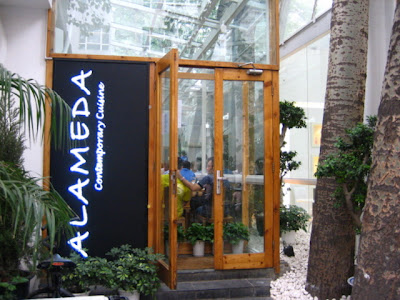 When filming ended we decided to treat ourselves to a real embassy-crowd meal. Alameda was named "Best Restaurant" by That's Beijing. It also got awards for best business lunch and best service. The lunch meal is a set price (68 RMB or about $8) for 2 courses and this is very pricey for China standards but normal for Beijing Western-friendly places which gives you an idea of how well you can eat for so so little. The food was great, not especially exciting - salmon with Dijon and crunchy cabbage, shitake mushroom soup, ricotta and pine nut fritters - but the setting was lovely, an airy glass-enclosed courtyard hidden in an alleyway off the main Sanlitun road. 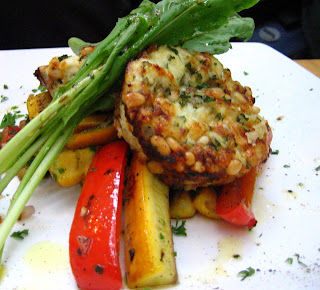 Lunchtime was busy and filled with expats and other assortments of Westerners. The service was great and it was one of the most relaxing meals we had in China. Come the Olympics this place will be PACKED.
On another night we headed to the non-imaginatively named shopping complex called "The Place," that is the kind of high-budget mall that is too expensive for most Chinese but are constantly being built and stand relatively empty save for Westerners and rich Chinese businessmen. We were attracted to The Place because it features a massive hologram roof awning over which ocean scenes and dolphins swimming are projected. It's strange and cool and was worth filming. 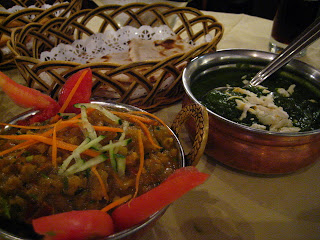 We also wanted to try Ganges, a reputable Indian restaurant located in the basement level of the mall. Dinner was delightful with well-spiced saag paneer, eggplant and chewy naan bread. The restaurant was cozy with cushiony seats and Bollywood movies playing on flat-screen TV's. Overall, a nice experience. On our last night out we dragged ourselves to Cafe Sambal, a trendy Malaysian joint recommended in the Beijing 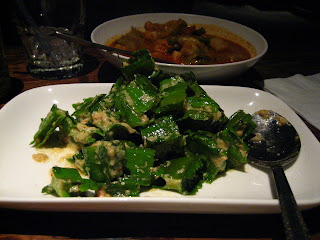 Wallpaper guide. At this point we were pretty travel-worn and Sambal's rustic furniture (low wooden tables and stools, bare walls) and super-dim-to-none lighting was sleep inducing and not too comfortable. The menu seemed elegantly composed and not being too familiar with Malaysian cuisine we ordered a vegetable curry (fiery and piquant, not too heavy) and stir-fried vegetables that looked star-shaped when sliced. The food was interesting and the crowd seemed uber-chic (the restaurant is located in a romantic courtyard close to Houhai Lake) and it seemed like a great place to go for drinks or with a small group. But despite all the upscale restaurants 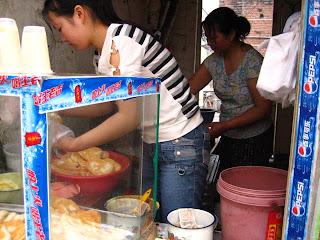 and exotic cuisine, the best food discovery we made in Bejing was the woman selling sesame breakfast buns from a little stall in the parking lot of our apartment building. After a few times ordering with my Chinese-speaking friend, I learned how to order in Chinese (super-exciting!) , though after patronizing her stall for 2 straight weeks she pretty much knew what we wanted each morning and greeted us with a sheepish grin that communicated "I know you, Westerners, it'll be the usual?" These sesame buns were the Chinese equivalent of an egg-McMuffin, though much, much tastier. The buns are fried and crusted with sesame seeds so they are crisp and warm, the bun woman then slices them open, brushes the insides with a spicy plum sauce and fills in a fried egg, lettuce (and of course ham if desired). This fortifying sandwich costs less than 25 cents. We enjoyed these crispy spicy eggy pockets of goodness every morning on our 30-minute cab ride through Beijing traffic. Of all the people we met during our film shoot, we have a soft spot in our hearts for the sesame bun woman and her paint brush of plum paste.