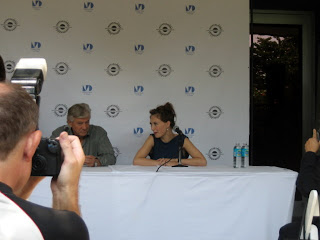 The Miami International Film Festival opens tonight with a film by rogue director Paul Verhoeven. A description of Black Book from imdb:

Set during the end of WWII, Black Book is the story of a Dutch Jewish girl who narrowly survives the war in Holland. She joins the resistance to find out who betrayed her family after all of them were killed in an attempt to reach the liberated south.

I've been impressed with Verhoeven ever since Starship Troopers , a fanstastically campy/smart movie, the best kind. And of course there's Total Recall and Basic Instinct. The man is a masterful and quirky filmmaker and we need more people like him in the film world. At the press conference this morning a the Shore Club he and the film's lead actress Carice van Houten shared some details about the making of the film.
On shooting two scenes in Israel, one at the Dead Sea and the other at a kibbutz south of Tiberias: The producers didn't want to spend the money to shoot in Israel but Verhoeven insisted. After five months of haggling they got the green light (and funding). They shot the scenes in June 2006, a few weeks before the conflict with Lebanon broke out.
According to the director, Black Book is the most successful R-rated movie in Holland today. (The only other successful R-rated film in Holland was Spetters, also directed by him in 1980.)
On why he chose to tell this story: What happened to resistance fighters and collaborators after the war was surrealistic, and these were questions Verhoeven had since his youth, growing up in post-WWII Holland.
Carice on working with Verhoeven: He's got this mixture of the curiosity of a young boy and an intellectual...And he's very impressed with women's breasts. It's good to be a woman around Paul.
Verhoeven: It's true...ever since I was 13 I have thought women's breast were the most beautiful things in the world. And I love women.