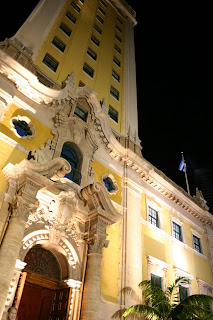 It was a night filled with the glare of the spotlight, the flash of the paparazzi and the classic elegance of black and white. Miami’s glorious Freedom Tower was the fitting venue for the opening gala of the Miami International Film Festival last weekend. All aspects of the event, from the décor to the beverages enhanced this tribute to Miami’s successful celebration of international film.
The evening’s theme, “Black Book/White Night/Hot Film” highlighted the opening film that preceded the event, Dutch film maker Paul Verhoeven’s dark WWII drama Black Book which was screened at the lavish Gusman Theater earlier in the evening. The dress code for the evening was black tie and white attire and everyone obliged, including the guests of honor Black Book director Paul Verhoeven and actress Carice van Houten. 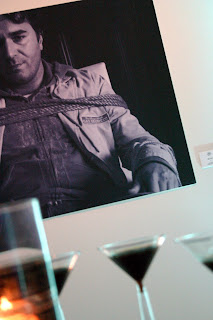 The pleasure was in the details as gala goers were greeted with espresso martinis by black-tie waitstaff as they glided into the grand entrance of the landmark building and made their way to the event space on the second floor. High-top tables were outfitted in black and white patterned fabric. Tables were lit with glass jars festooned with actual film, giving the light a dewy glow. Black and white film stills from inconic movies were blown up and placed throughout the venue, providing the only dramatic touch to the minimalist event space.