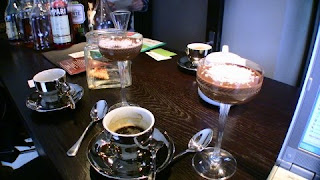 In a country where things move too fast, too hectically, and no one has time, it would seem that a movement to put the slow back into food preparation would never catch on. So it's suprising to learn that the slow food movement is gaining momentum in Israel. Based on the principle that one's food should not originate too far from the plate, slow food emphasizes fresh, seasonal ingredients, a slow cooking process, and in some cases, organic farming methods. On the forefront of slow food in Israel is Pausa Inn, a charming bed and breakfast (but really dinner is where the action is) in northern Israel. I had heard about Pausa this summer when an article appeared during the war with Hizbolla that said how this quiet little inn was staying open and serving their long attentive meals while Katusha rockets were falling all around them. Turns out they had a lot of journalists staying with them this summer and that's how they managed to stay afloat when so many other hotels and businesses in the north lost income during the war. When I visited Pausa last week, owners Avigdor and Reinat treated me to a delectable chocolate mousse. Flavored with fresh mint from Avigdor's garden and dusted with coconut shavings it was deep and soulful, a richly decadent testament to the wonders of slow cooking. Accompanied by a strong espresso in Avigdor's originally-designed metallic-ceramic cups, the dessert won me over. If this is what slow food is like bring on the dilly-dallying.