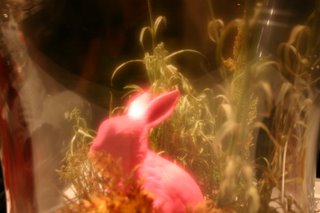 General Impressions of Tokyo. VERY CLEAN. Let's just say I wanted to take my contacts out, rub them on the sidewalk and put them back in my eyes, that's how clean the streets are. And so futuristic. LOTS of shopping everywhere. A Louis Vuitton on every corner, Chanel rules and everyone is so fashionable, there's no such thing as casual. And the gals are really into the knee-socks look. Is that still trendy? The toilets have menus here, one option includes "the sound of toilet flushing" in case you're pee shy, I guess.
Tokyo is also really safe. Friends had said that, but it's so obvious when you're there that no one would mug you, or steal or scam you. You could pass out on the sidewalk with your wallet next to you and no one would take it. Samurai code of honor, it seems.
There is a lot of English on the signs, in restaurants, so it's not difficult to communicate, though Japanese are really self-concious about speaking English but they are exceedingly polite and will help you find something and even get off the train to make sure you find your destination.
Our 2 days there involved lots of raw fish, crashing a party with drag queens, and scoping out interior design stores.
Here's a quick rundown.
6:30 am Tsukiji Fish Market - if it lives in the sea it's on sale. From gigantic tunas to tiny little crawfish. Should have worn rubber boots for the excursion. lots of fish juice everywhere 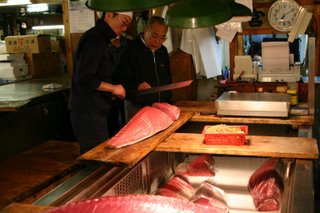 7:30 Sushi breakfast at Daiwa Sushi, a tiny 12-seat restaurant. The freshest sushi in the world since it's right in the market. After a 25 minute wait, we eat toro (fatty tuna belly, the most expensive sushi you can get) for 800 yen a piece ($8) it's a splurge, but it was probably swimming in the sea that morning. 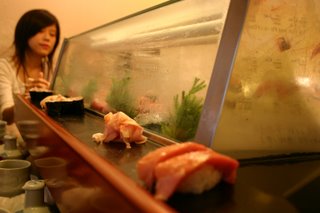 9:00 Walk to Ginza neighborhood (the 5th Ave. of Tokyo) all the stores not yet open. Onward!
Walk to the Imperial Palace. Can't see much except garden and guards. Lots of giggling Asian tourists.
Visit Hotel Okura a mid-century modern design gem. I feel like Greg Brady hanging in the lobby. 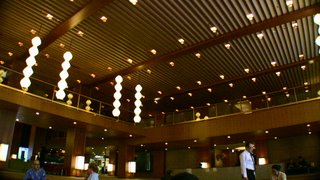 Walk to Roppongi Hills - a tower that's a city within a city.
1:30 Lunch at Le Atleier de Joel Rubuchon. We opted for the take out cafe ( only $4 a croissant!) and it was the lightest croissant imaginable. Good job, Joel. 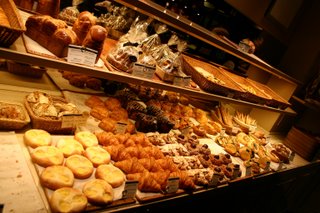 See the Bill Viola Show (even though already saw last year at the Whitney in New York) at the Mori Art Museum on the top floor (52nd) of Roppongi Tower.
Visit "Complex" a building of emerging art galleries in Roppongi.
5:00 Walking from Roppongi to Shibuya we stop at Superdeluxe, a lounge and media space. There's a private party going on for Hoya Crystal. 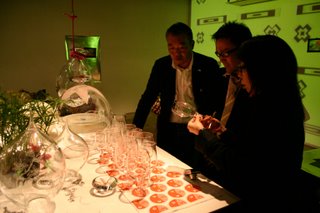 There is free food and drink, we stay. There are drag queens and uncomfortable Japanese business men, we park ourselves there. After some Awamari cocktails we decide we might pass out if we drink more due to jet lag so we set out again. 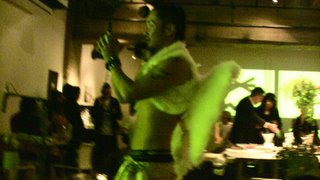 7:00 Shibuya Crossing - the most orderly diagonal crossing in the world. It's like Times Square but with a lot more people, and they're all really stylish.

Email ThisBlogThis!Share to TwitterShare to FacebookShare to Pinterest
Labels: Tokyo

I'll do my best, blogmaster, but so far the only Jews I've met in Asia are Westerners. But wicked aged tofu I can do.