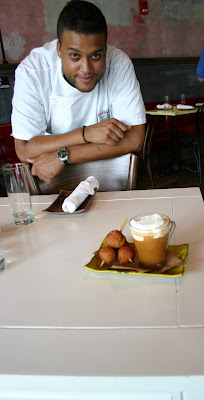 I recently covered Sugarcane's Lobster Cappuccino and Beignets, possibly the finest take on coffee and doughnuts in the city, and today I'm craving this dish so I figured I'd pay tribute again and delve into its preparation. This frothy, soul-warming combo is the love child of a New England seafood shack and a mad carnie's fry stand at a state fair. It is also deceptively simple: a heady mix of lobster bisque topped with cream and served with four lobster fritters.

To make the bisque chef Timon Balloo (pictured) throws lobster shells, plum tomatoes, lobster stock, aromatics like coriander, star anise and Szechuan peppercorn in a roasting pan and then douses the whole mix with a layer of cognac. He then slow cooks the mix for six hours, strains and reduces it and adds chunks of lobster meat to the musky, velvety soup. It all gets topped with heavy cream that's been whipped and frothed with a latte steamer and accompanied by the doughnuts (a simple yeast dough, with the sugar left out and fresh pepper added) stuffed with lobster meat.
It goes for $10 and is only offered as a special, but they should really add this gem to the menu.
Read my Q & A with Timon here. 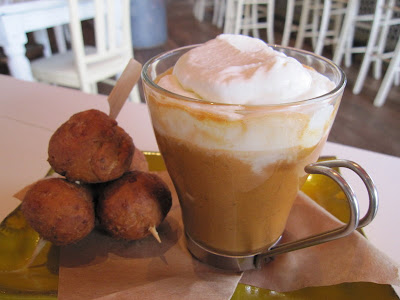 Ok, at first I was ashamed of myself for not checking out this place yet but now I'm really ashamed.

You also need to try Linda Bean's Lobster Roll in Delray if you like New England lobster rolls. Unbelievably good.

Yeah, seriously, what are you waiting for? It's been open like 6 months already. And Lind Bean's is on my Delray list. Along with Chef Allen's new place (despite all the naysaying). Curious to try it.