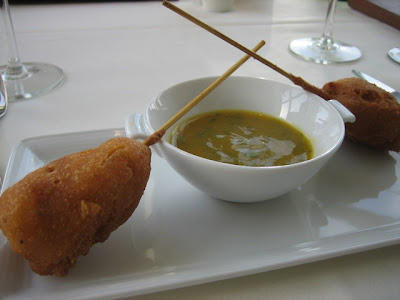 Soon after I wrote about the lobster corn dogs at La Marea at The Tides it was brought to my attention that another restaurant in town, The Restaurant at Le Meridien in Sunny Isles, was also doing their own version of the high-end low-brow snack. Actually, it was the chef himself who alerted me to this, in the form of an email something to the effect of "Wtf? I been doing these for years!" It was a bit more articulate than that, but that's what he meant. So I hopped over to the condo canyon on A1A and claimed a table by the floor-to-ceiling windows overlooking the pool and the ocean in the too-empty-for-this-good-a-restaurant dining room. 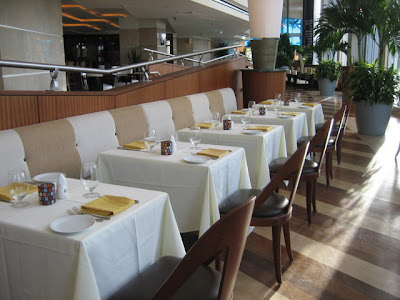 The lobster corn dogs are on the bar menu, but if you ask nicely they'll bring them to you in the dining room. They're $12 for two crispy fritters. These differ from the pups at La Marea, as the chef there forms the lobster mousse into actual sausages and then coats and fries them. These were more like lobster tails breaded with a cornmeal and pancake batter, which added welcome sweetness, and served with a mango dipping sauce. While I was there I decided to take a look at the rest of the menu and discovered some surprising gems. 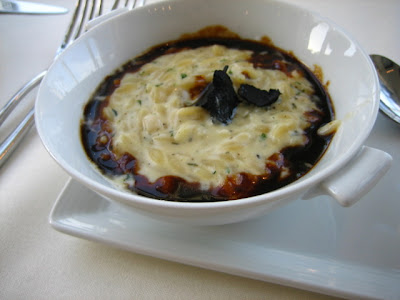 The truffle mac and cheese, for one. It's actually a delicate bowl of orzo bathed in a not-too-heavy cream sauce offset with a veal demi glace mixed with a sherry gastrique to cut the richness. Chef Tom Ryhneer used to work as a saucier and the man takes his drizzles seriously. Chef's got a good team there, with sous chef Tommy Nguyen who previously worked the kitchen at the ill-fated Nikki Coconut Grove (good food, cheesy atmosphere). He describes the menu as "food for the times," meaning, he wishes he could put more lobster into things - like the petite grilled cheese sandwich that comes with the fantastic roasted tomato soup, but he's trying to keep the prices down and offer something attractive to the hordes of tourists that populate the beachy 'burb. So the few things directed at that crowd - the spinach artichoke dip, the vegetable quesadilla - aren't really the things worth trekking to the hotel for. But the mac and cheese is, as is the churrasco with a fantastic roasted corn relish and the mini steak tacos with cilantro cream. Prices are relatively low, too, with most mains under $25 and starters average $10.

awesome. Is this the new "it" thing? I had some great prawn dogs at Neomi's this past weekend.

So are any of these chefs sharing their recipe? I'd like to try these, but not planning any trips for a while.

Yeah, the prawn dogs at Naomi's are fantastic. I could eat a dozen in no time haha.

Cork, Blind - were the prawn dogs breaded with a sweet batter? And was it "dog" style or just breaded meat? Those sound good!

Lobster Queen - I'll ask for you.

the ones I had (they probably have a few variations) were breaded with a seasoned sweet dog style, very lightly. They sort of straddled the "corn dog" with sweetness and tempura in lightness. They served them over a bourbon-mustard (?) remoulade and salty kettle corn (the salt came from dried huitlacoche). Everything was salt and sweet. If they don't have a version for the bar menu they really should!