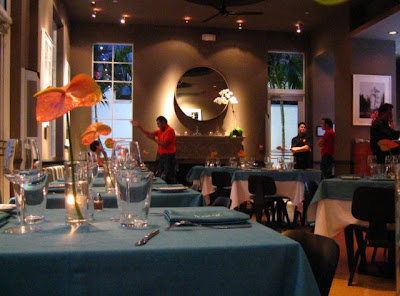 Miami has yet to catch on to the one-dish restaurants popular in other food cities (like New York's mac and cheese-heavy 'Smac and Belgian fry mecca Pomme Frites) but we were recently blessed with the opening of French import Caviar Kaspia, serving the Parisian restaurant's namesake fish roe and other smoked fishies. But caviar is expensive and the owners have the shit luck of opening a pricey caviar restaurant right now, during a financial climate when all anyone wants to do is pontificate on pizza crusts and burger toppings.
So they've expanded the menu a bit and added some traditional French dishes like duck confit salad (delicious, but still pricey at $22) and a lunch time Croque Madmoiselle made with smoked salmon and salmon roe. Salmon roe is the way to go if you don't want to spend a lot but still want to experience those lovely pearls of salty oceanic goodness. The salmon roe blinis are $22 for 1 oz. of fish eggs that come with fluffy pancakes and feather-light creme fraiche. Kaspia is famous for their baked potatoe and if you're looking to splurge, this might be the fanciest spud in town. The potatoe is presented with a creamy mash made with chives and creme fraiche and topped with caviar from their list which ranges from $49 for a 1/2 ounce of Imperial Baeri to $360 for an ounce of wild Iranian golden Oscietra. We went with the modest Imperial Baerie and it was a lovely combo, the silky potato enlivened by the slightly iodized roe that pop with mineral saltiness with each bite. 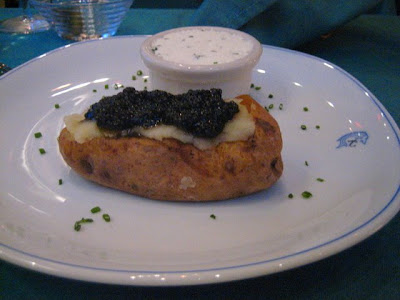