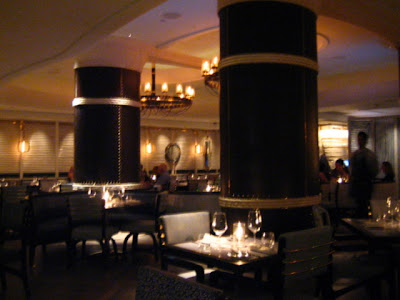 Of all the restaurants opening at the Fontainebleau I was most excited about Scarpetta, the hip Italian newcomer that wasn't generating as much buzz as Gotham Steak and Hakassan but seemed equally as compelling as those other chef-driven spots. If you keep up with the New York dining scene you know that Chef Scott Conant's opening this year gave Manhattan food people a reason to rethink Ital staples like spaghetti and fried mozzarella with renewed interest. (The NYTimes review sums it up nicely). So we ventured to the recently-renovated gargantuan hotel to see if the Miami outpost lived up to the Big Apple hype. And the answer is - Yes. Yes it does. It's a damn good restaurant with a very talented chef. Put simply: the man know his way around a tomato and thankfully we get to reap the benefits of that sublime partnership.
First, the space. It's gorgeous. Romantic without sacraficing class, the chrome, brass and marble play off nicely with the blue and grey nautical color scheme. If it's a nice night, sit outside on the sprawling oceanfront patio. But it would be a shame to miss out on one of the city's more handsome dining rooms. 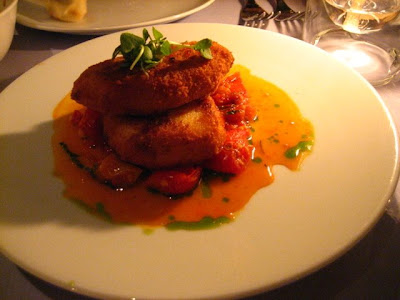 We started off with the basket of focaccia and stromboli bread made in-house (the bread and the pasta are all made in-house) and a starter of fried mozzarella lightly breaded and served over stewed tomatoes that had just the right amount of sweetness and acidity coaxed out of their juicy selves. The polenta starter was also ridiculously silky and rich, accompanied by a ramekin of stewed mushrooms that added an earthy gravy.
But on to the spaghetti.
It may seem odd to rhapsodize about such a banal dish - pasta with basil and tomatoes - but it was surprisingly flavorful and satisfying. At $23 it's probably the most one would ever pay for spaghetti but when the execution is so honest and the effect so fulfilling it's easy to see how a dish like that could inspire return visits.
Scarpetta at the Fontainebleau, 4441 Collins Ave, 305-674-4660.