A Late Snack at Red Light

Stopped by Red Light, Chef Kris Wessel's new spot, last night. Something about parking in the Motel Blu felt so L.A. Maybe because I had film making on the brain (this was after our screening, which went well-a big thank you to everyone who came out), but it was like a scene out of Lolita. The restaurant itself is narrow and cozy with a wrap around bar and booth seating up against big picture windows that offer views of Biscayne where we sadly watched an older black couple run their car over the Biscayne median and pop two tires. But hey, that's Biscayne for you. The outdoor area by the river is really beautiful and I can imagine many lazy enjoyable nights spent drinking beers on the patio. The restaurant was offering a short menu of "opening eats" with five options including bbq shrimp and dip bread ($8), white corn, baby conch fritters with Trinidad pepper mash ($9) and a fish of the day - snappper - with chef's veg of the day ($18). Considering we stopped in at about 11 and weren't terribly hungry we went for the organic egg, morbier cheese and tomato toast ($8). 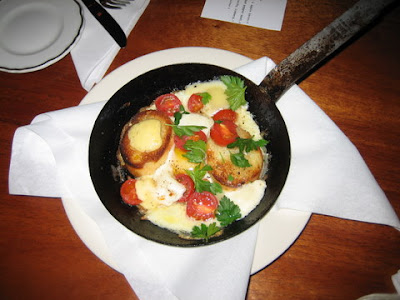 The dish usually comes with apple bacon but my dining companion is allergic to pig products (no joke - you've never seen "pork lip" like this) so we got it sans the piggy and it was pretty delish. The chef is trying to use as much organic produce as possible and the tomatoes had that undeniable tang and flavor which was perfect combined with the richness of the egg and cheese and the crisp toast doused in a rosemary-tinged olive oil. Loved the presentation of the little pan - reminded me of how Israeli restaurants serve shakshuka, a similar poached egg dish. We washed it down with a Landshark beer, keeping it nice and local. Excited to go back and experience the restaurant once the full menu is in gear.
Located at 7700 Biscayne Blvd.
(305) 757-7773

Where is it located?

I've posted the address and phone number above. It's on 77th and Biscayne.

been waiting for them to open. sounds tasty. i think you've motivated me to go tonight. thanks ;)

Wow, sounds good. Wish I couldve made youre screening but I had just flown in from Charlotte, NC and was bushed. Hope it went well!

da lizza - looking forward to your report!
bm - yes it went great, but would have enjoyed your company. No worries, you can catch the film at the PB film fest on April 14. The theater is at Boca Mizner if you're up for it.

"Something about parking at the Motel Blu felt so L.A." - I don't know about that. In my twenty-something years in L.A. I don't think I've parked anywhere as, umm, intersting as the Motel Blu!

Glad to see the place up and running. I'm a few blocks away and have been itching for something new opening that has nothing to do with sushi (we've got like 5 freaking sushi places within a few blocks of each other!). Need to make a point of going. Maybe I'll go all out and take a taxi? That'd be very anti-L.A. though!

Congrats on the film. Had seen your post on it and it'd looked interesting. Looks like a road trip to Boca!

l2m - have you tried the new Moshi Moshi? Curious about it. And regarding the film - would love to have you join us! Let me know if you can make it

no worries. i'm still really rooting for this place and i'm sure i'll be back. :)

The dish is bacon and eggs!!! How can you leave off the bacon? That's a freakin sin.

Thanks for the invite, but given that I'm notorious for only having a one week outlook on my schedule, it figures that I forgot that my future brother-in-law + wife and kids are visiting next week. Believe me, a trip to a film festival in Palm Beach is infinitely better than what awaits us at Parrot Jungle and the Children's Museum. Good luck on th showing.

No worries. We'll catch you on the next one!