Sunday at the Sobe Food Fest 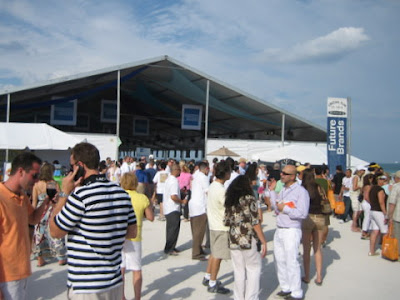 Are food personalities the new rock stars? At 5pm Sunday, after imbibing and feasting for upwards of four hours you could almost find yourself thinking Bobby Flay is this decade's Brett Michaels. Listening to hundreds of boozy ladies whooping it up every time Flay said the word "rub" in the context of barbecue-speak can really wharp your perspective on sexiness. But I'm getting ahead of myself. First there was Padma Lakshmi in a white tank top, Pocahontas-like pigtails, a sari-wrap skirt and a headset a la Madonna's Blond Ambition tour demonstrating how to make cashew cookies. 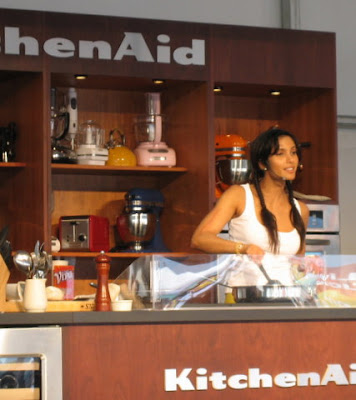 Things were fun and a bit naughty at first as she asked "How drunk are you guys? Don't worry I was drinking in the green room too!" And later, when mixing up the batter and noticing the mirror above her cooking station remarked, "Can you guys see the bowl? Can you see down my shirt?" and was met with predictable yelps. 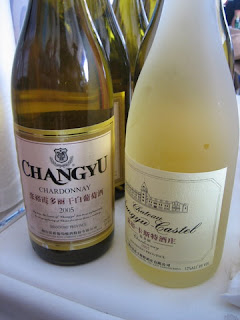 The tasting tents were jam packed with serious wine drinkers and not-so-serious anything drinkers. We happened upon an intriguing winery from China called Changyu. Turns out the French set up shop in the Shandong province and churn out a respectable product. It was a leap of faith tasting it, as I remembered the awful Great Wall Wine we wasted brain cells on the last time we were in Beijing, but the Chardonnay was fairly decent. At $9 a bottle you may see it in stores down here soon. There was some good eats to be had as well. The Forge had their usual crowds clammering for a filet sandwich and Legal Sea Foods set up an actual raw bar with an oyster shucker on hand. Eggwhites Catering put in some serious effort for presentation with their eggshell cups topped with shrimp. It was also pretty "green" of them for using biodegradable materials instead of the usual paper-plastic combo but I think their intention was more clever branding, which it was. 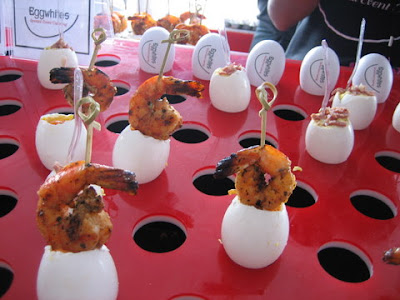 Blue Door got creative with a delicious salmon tartar topped with "caviar" which was really soy-flavored tapioca balls. 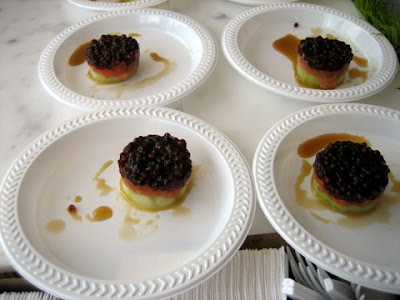 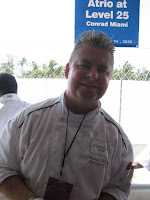 sweltering tents cooking, serving and not really getting much love from the tipsy hordes. Atrio's Michael Gilligan was charming and gracious despite the heat and chef Michael Wagner of Hollywood's Lola's on Harrison served up his signature Coca-Cola barbecue beef ribs along with a smile.

There were plenty of local celeb-chefs in attendance, either at cooking demonstrations (Ortanique's Cindy Huston vs. Johnny V) or mingling with the crowds, shaking hands (Sean Brasel of Touch). Top Chef Miami toques were also in the tents with Brian Marlarkey holding forth at the Oceanaire table and Howie Kleinberg facing off against Govind Armstrong in an Iron Chef-esque competition where an inebriated audience moderated by Belkys acts as judge. They also had to use products from Target's Archer Farms. It ended in a tie. 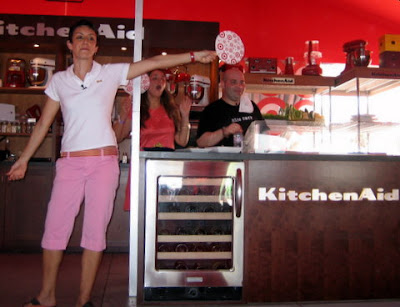 It was SO hot. Everyone was melting. I didn't wait for Padma to finish, I got distracted by something, I forget what. It was nice how you could sort of dip in and out of the tents and wander around.

I also went Sunday and loved it. It felt like there were fewer people there than the last two years. My favorite dish was the Blue Door "caviar". That whole section of booths on your left side when you walked in the first tent were the best IMO. I saw Padma on the beach, and she was really nice. I also saw Howie and the guy from Oceannaire. Forgot his name.