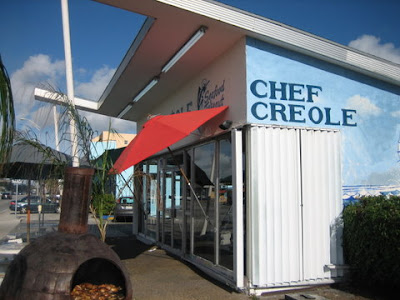 We stumbled on Chef Creole's North Miami Beach location (13105 W. Dixie Highway) on a lazy weekend and it was a revelation. Apparently the namesake chef is like the Emeril of Haitian food. According to the website: "Owner Chef Wilkinson, "Ken" Sejour has grabbed his native Creole cuisine by the fishtail and created Haitian seafood for the masses." He also markets his own sauces and I remember seeing him on an episode of Anthony Bourdain's show. There's not much of a restaurant ambiance, it's mostly a takeout counter with a friendly dreadlocked dude taking orders and packing your food to go. Behind the counter a TV plays endless loops of a Chef Creole video where the exuberant toque waxes enthusiastically about his cooking and saucing techniques. Outside there are picnic tables and a substantial smoker with a dozen jerk chickens smoking away. We ordered the fried mahi with dirty rice and plantains. Ridonkulously delicious. It was frickin cheap, too. $8 for an order that easily fed two gluttons. The fish was super fresh and meaty and stood up well to its thick cornflake crust. The little container of spicy sauce provided an exciting fiery kick and the plantains were sweet, lovely specimens of fried fruit. The rice helped to quell the fire, which I've learned, is the only antidote to spicy food - not water, that just spreads it around. Discovering Chef Creole's made me happy to live in Miami. 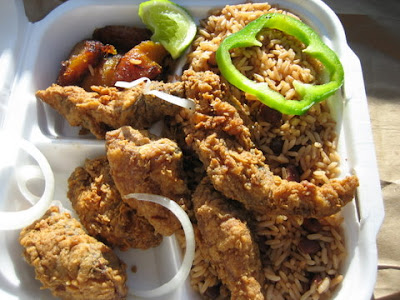 Your right, I'm from Miami and was practically raised off of Chef Creole. I highly recommend his delicious food to all!

Highly recommended. This girl I was friends with who is half Haitian and half Colombian took me here, the food was really good. Not a big establishment but there is adequate room and the establishment was clean, no long wait time. The food is very addictive. If I am in Miami again someday, I will definitely check it out.

This food is excellent. When I come to Miami, this is the first stop. Their conch fritters are soo good. I like the plantain both sweet and fried (tostones). The oxtail stew is super good. If you haven't tried the Pikliz (spicy coleslaw)...it is addicting. What I like about Hatian food is that it is really tasty and ethnic, but not it is food that the mainstream american would eat...kind of how everybody loves chinese food. Because there are literally NO Hatian
restaurants in Minnesota, I'm stuck watching youtube videos on how to make it at home:( It's just not the same. Go there!